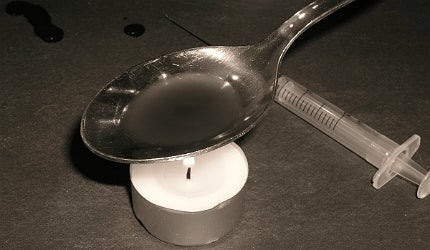 The Health Protection Agency confirmed last Monday that a person who injected heroin had died of an anthrax infection in Blackpool, three weeks after another drug user in the same area also died from anthrax. People involved in two other cases, both now recovering, were also confirmed in Scotland and Wales.

Although a direct link has yet to be confirmed, seven other people in Europe, three in Germany, two in Denmark and one in France, are also believed to have contracted anthrax from using heroin. Not since 2009 / 2010 has there been an outbreak of anthrax infections in the UK or Europe. And before then it was more than 50 years ago.

Both the European Centre For Disease Prevention And Control (ECDC) and the European Monitoring Centre for Drugs and Drug Addiction (EMCDDA) have issued warnings, concluding that heroin users in Europe are still at risk of exposure to anthrax and medical staff should be prepared to treat more cases.

"Not since 2009 / 2010 has there been an outbreak of anthrax infections in the UK or Europe. And before then it was more than 50 years ago."

The first few hours of infection are vital, otherwise anthrax can poison the blood stream, so what life saving actions would a medical professional take in order to save a patient’s life and prevent further contamination?

"The important thing is not to miss the anthrax and to start appropriate treatment, in many cases that leads to surgery and cutting out the infected wound," says Dr Tim Brooks from the Health Protection Agency (HPA), who gives out advise to hospitals and doctors on anthrax infections.

"Anthrax can be cured with antibiotics, if treatment is started early. It is therefore important for medical professionals to know the signs and symptoms to look for," adds Dr Fortune Ncube, an expert in blood-borne viruses at the HPA.

The outbreak that occurred in 2009 / 2010 was the largest single common source outbreak of human anthrax documented in the UK for more than 50 years. In all, 119 people were classified as anthrax cases, 14 of which died in Scotland. Protocols being used in this outbreak are the same as those used by Health Protection Scotland in 2009 / 2010.

Anthrax can infect the body three ways; via broken skin, the inhalation of airborne spores or in the stomach, usually through eating undercooked infected meat.

Patients suffering from inhalation anthrax, possibly through smoking infected heroin, are harder to treat because unlike cutaneous infection, symptoms don’t manifest until much later when the blood may be poisoned and antibiotics are redundant.

Asked whether it’s possible there could be more unrecorded deaths from anthrax, where the victims were unaware they were infected, Dr Brooks says it’s possible.

"Due to the illicit nature of heroin use, it is hard to control an outbreak such as this and limit the amount of victims."

"I think over the years, because it’s been around for a very long time on and off, I’m sure that is true," he concedes.

Due to the illicit nature of heroin use, it is hard to control an outbreak such as this and limit the amount of victims.

"You can not enforce quality control in drugs that are supplied illegally. We we’ve done is worked with the drug user forums and support groups to advise people if they have any symptoms they should seek help. Some do, some don’t," explains Dr Brooks.

Although anthrax is rarely spread from one person to another, in fact, according to an article written by Professor Les Ballie of Cardiff University , a bacillus anthracis specialist: "It lacks the ability to spread from person to person and relies on killing the host to return to the environment. Indeed…the bacterium spends the bulk of its time as a dormant spore waiting for the next grazing victim to chance along."

Handling the body of an infection victim

"While solid procedures are in place there are only two types of treatment for an infected patient: antibiotics and surgery."

The amount of time anthrax can linger in the environment is why proper procedures need to be carried out when dealing with the body of an anthrax victim.

Dr Brooks explains: "They [patients] bleed to death at the time they go [die] and that blood is highly infectious once it comes into contact with air and causes spores, so you must lock it up in order to prevent an airborne infection. In hospitals it won’t be spread by air if you keep everything clean."

Special measures must be considered when preparing the body for burial or carrying out a post mortem.

"Do not embalm the body of an anthrax victim because you take all the blood out when doing that, so the people doing it can get in trouble. We recommend that the body be cremated but if that is not possible they should be buried in a led sealed coffin.

"If we do a post mortem, it is done in a special post mortem facility with people specially protected," says Dr Brooks.

These measures are necessary to prevent anthrax from spreading into the ground where it can lay dormant until, for example, an animal comes along and grazes and the anthrax finds a new host. Although there is no legal requirement for anthrax victims to be cremated, it is believed all 14 victims of the last outbreak were.

There is no way of knowing whether there will be more victims in this outbreak, but there remains a risk at any time anthrax contaminated heroin could be imported to the UK again.

When will anthrax strike again?

Professor Ballie explains how the contamination might have occurred and could easily occur again: "Anthrax probably got in to the heroin from two sources; either at its shipping from wherever it started out [possibly Afghanistan or Pakistan] someone mixed it with something that contained anthracis, or the actual packaging got contaminated on [its] route to the UK [possibly via Turkey].

"I expect [during the] next 100 years, unless there is a change of policy on drugs, this will occur," predicts Dr Brooks.

While solid procedures are in place there are only two types of treatment for an infected patient: antibiotics and surgery. America is currently developing others but none that are yet licensed.

There is also a vaccination available but there are no plans to vaccinate the drug-using community as yet. It’s simply a waiting game for those using heroin and for those treating them with the hope that whenever infection occurs it can be diagnosed and handled early.

Protecting the US from bio-threats: a public-private approach

Mid-way through 2012 and it’s easy to feel that the United States (US) Government has stopped taking bio-security seriously.

Research into anti-addiction drugs and vaccines is booming, but big pharmaceutical companies are yet to show support.

Cutting the red tape: is the FDA a threat to patient health?

This week an anthrax outbreak warning was issued by the Health Protection Agency – the second in just over two years.