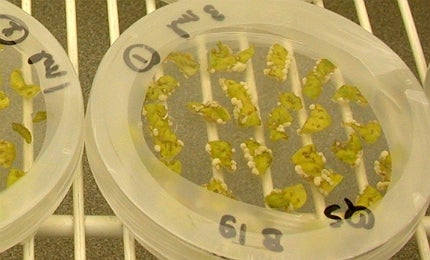 The world’s entire supply of insulin could be provided by just one farm growing 16,000 acres of safflower, while a 20,000 square foot greenhouse would be sufficient to meet global demand for the anaemia drug Erythropoietin. Yet current regulations, which were set up for GM crops, rather than plant-made pharmaceuticals, mean the cost savings that would result from this method of drug production are entirely negated, a situation that is unlikely to change for some time.

Humanity has been using plants to produce medicines for hundreds of years, albeit using cruder methods than are available now. But modern biotechnology means scientists now have the ability to use plants as factories to manufacture potentially life-saving molecules, such as recombinant human proteins, antibodies and vaccines. This is known as plant molecular farming and essentially involves the genetic modification of plants to enable them to produce the molecules that drug developers want them to.

So, why start using plants as hosts, rather than continuing to produce drugs in mammalian and bacterial cells?

For one thing – cost. "Demand for drugs and industrial proteins will only continue to grow," Sparrow notes. "And plants offer a number of potential benefits in terms of low manufacturing costs and production scalability, as well as low early stage capital investment and the need for lower technical expertise for growing them."

When growing medicines in plants, there is no need to spend hundreds of millions of dollars on a new pharmaceutical facility, for example; a field or a greenhouse is often all that’s required for the first part of the process, significantly reducing capital costs. With plant-made pharmaceuticals, the production process is often shorter than it is for drugs grown in mammalian cells, too.

In 2012, the therapeutic enzyme Elelyso became the first plant-derived product approved by the US Food and Drug Administration (FDA) for the treatment of Gaucher’s disease – a rare, inherited disorder that causes too much glucocerebroside to build up in cells and certain organs. The drug showed a 25% reduction in production costs, compared to its more conventional competitor Cerezyme, which is produced in hamster cells.

This is because Israel-based Protalix, which produced the drug in a carrot cell system in collaboration with Pfizer, was able to circumvent the expensive protein remodelling required during the production of Cerezyme.

And it’s not just cost that makes plant molecular farming attractive. Plants have been shown to allow the production of medicines that have been hard to produce with more conventional systems, because of incompatibilities with host cells. Moreover, by using plants, drug developers can eliminate the risk of the cells carrying mammalian viruses.

There are also clear advantages for the developing world. As the raw materials can be stored easily as seeds, this could eliminate vaccine storage issues, and if seeds could be transported easily to local production and extraction facilities without the use of the cold chain, the technology could help boost struggling economies.

Regulatory issues: Europe vs the US

But despite the clear advantages of plant-made pharmaceuticals, there are still huge hurdles to overcome before they can be produced on even a small scale – particularly in Europe.

"By using plants, drug developers can eliminate the risk of the cells carrying mammalian viruses."

In the EU, unlike in the US, plant-made pharmaceuticals have to be authorised in the same way as GM agricultural crops, which are destined to enter the food and feed chain. Once they are approved, GM agricultural crops can then, in theory, be grown by any farmer in the EU. "This requires extensive paperwork, environmental and safety evaluation, consultation and agreement across member states and costs millions of pounds per application," Sparrow says.

Plant-made pharmaceuticals, however, are not grown to enter the food chain; rather, they would be harvested, processed and formulated into therapeutic or industrial proteins. "It would be small acreage and grown by contract farms under license," Sparrow says. And yet, plant molecular farming is still currently subject to the same costly regulations as GM crops.

This, for Sparrow, is what needs to change. In a recently published paper, she and five other scientists proposed amendments to EU Directive 2001/18 to allow pharmaceutical products from GM plants to be commercialised without needing authorisation to enter the human food or animal feed chain. Instead, they believe these plants should be grown under clearly defined and enforced conditions, to keep the food and animal feed chain contamination free.

"Regulatory oversight would mean that a zero tolerance threshold would be in place to ensure these crops never accidentally ended up in the food chain," Sparrow emphasises.

Sparrow feels European regulators can learn a lot from their American counterparts in this regard. "The additional requirements APHIS [the US Animal and Plant Health Inspection Service] have made for molecular farmed crops would be a good starting point for the EU," she says. "These include additional training for growers, dedicated farm equipment, specialist cleaning of farm equipment post-harvest, no food crops to be grown in subsequent years on the same site and increased separation zones from agricultural crops."

Europe’s drug regulations also need to be developed to ensure the production of any plant-based pharmaceuticals follows suitable cGMP [current good manufacturing practice] guidelines. "To enter clinical trials all proteins need to have been produced under cGMP," Sparrow explains. "So the guidelines for cGMP that have been drawn up with mammalian, yeast and bacteria cell cultures in mind need to be adapted to work for plants, taking into account defining master and working cell or seed bank, batch-to-batch consistency and environmental conditions, such as the weather, soil and so on."

According to Sparrow, progress is being made on this front. "EMA have drawn up guidance notes for production in stable transgenic plants now and new products coming through are road testing the suitability of the guidelines," she says.

Sparrow herself has also been involved in a research consortium called Pharma Planta, representing 33 academic and industry partners in Europe and South Africa, which aims to develop strategies for the production of pharmaceutical proteins in plants. Through Pharma Planta, Sparrow’s colleagues have entered a plant-derived anti-HIV monoclonal antibody into human clinical trials, and, along the way, helped develop a new regulatory pathway for plant-derived pharmaceuticals.

"It was all new territory but we have made a big step forward," she says.

"Scientists now have the ability to use plants as factories to manufacture potentially life-saving molecules."

There is still a long way to go, however. The plant-made pharmaceutical produced through Pharma Planta was grown in containment, rather than in an open field. "It was considered the easier option both from an approvals point of view and because it enabled us to control the conditions better and helped with cGMP compliance," says Sparrow. Similarly, Protalix’s Elelyso is not subject to field regulation as it is produced in suspension cell culture.

Of course, growing plants in open fields is where the true benefits of cost and scalability will come in for some products, but, for Sparrow, this is still a long way off. "The key concerns will be keeping the food and feed chain contamination-free," she says. "This will be of high importance, especially in Europe, where the issues surrounding the cultivation of GM agricultural crops remain a contentious concern."

Treading carefully and educating the public is, therefore, absolutely essential. "We have to show the advantages," says Sparrow.

"A lot of people don’t realise that a lot of our medicines are produced using genetic modification of mammalian, insect and bacterial cells, and they’re quite happy with that. I think if there was a choice of a mammalian cell or a plant cell, for some products they’d probably favour the plant. People will be watching this space with interest."

Deliberately inflicting carefully controlled painful stimuli on human volunteers could reduce costs and speed up development of new painkilling drugs, according to a new study by Dr Jörn Lötsch of Goethe-University Frankfurt.

Trialling the first ever HIV vaccine

In October 2012, Canadian scientists announced that they may have discovered the first and only preventative HIV vaccine that has shown no adverse effects in Phase I human clinical trials.