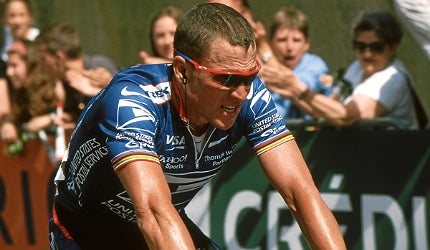 Lance Armstrong’s career was blighted by suspicion, which has been shown to have been justified. Image courtesy of Benutzer Hase

Lance Armstrong and other members of the US Postal Service cycling team are alleged to have engaged in a meticulously planned and calculated doping strategy from as early as 1998. This has led the US Anti Doping Agency to dub it as the “most sophisticated, professionalised and successful doping programme that the sport has ever seen.” Using a complex web of lies, intimidation and maverick science, Armstrong stayed one step ahead of anti-doping officials and cheated spectators.

Testimony from team members at the time claim that substances including EPO, testosterone, human growth hormone and cortisone were used on a regular basis. The extent of their use has been revealed by dozens of witness testimonies that revealed abuse on several occasions, including one particular incident when tens of thousands of dollars worth of performance enhancing drugs were flushed down a toilet during a race from fear of a police raid.

The US Anti-Doping Agency’s (USADA) report into Armstrong’s doping campaign has revealed, for the first time, the calculated and knowledgeable approach adopted to deceive drug testers and fellow athletes. Through leaked information and consultation with doctors, Armstrong was able to evade detection for more than a decade. Only now that pharmaceutical science has caught up with his methods has the extent of this campaign been revealed.

Having returned to the sport following his well-documented fight with cancer, Armstrong joined the US Postal Service team in 1998, with witness testimony alleging doping to have taken place pretty much from the start.

“Through leaked information and consultation with doctors, Armstrong was able to evade detection for more than a decade.”

EPO was used alongside testosterone and cortisone in order to aid stamina and recovery, with team officials creating false documents to comply with Tour de France rules relating to cortisone use.

This process could be completed within 20 minutes, with the US Postal Service team alleged to make clean riders test before those who were doping, allowing them time to use saline.

In the absence of a stringent test, riders could use EPO without fear of punishment. A stringent test capable of detecting EPO use was still two years away at this point, so the drug’s use was relatively unpoliced. It was only after the entrance of a test designed to catch EPO use in 2000 that Armstrong and his US Postal Service team began to meticulously plan their doping to stay ahead.

“EPO, used to create immature red blood cells, was a regular method of doping adopted by Armstrong and his teammates.”

This method is, however, intrinsically flawed in its approach to catching riders on the tour. By measuring and comparing ratios, the test can be fooled by purposefully increasing the amount of EPO in the acidic region, achievable by stimulating the natural production of EPO through exercise at altitude. Riders in the Tour de France commonly have training camps at altitude to prepare themselves for the demanding climbs of the mountain stages.

Armstrong’s team did, however, complement this with regular use of a hypoxic chamber, simulating the effects of altitude training. The man to recommend such a measure was Dr Michele Ferrari, an Italian physician and cycling coach who has been indicted and handed a lifetime USADA ban for his work.

Ferrari became involved with the US Postal Service team in 1999 following previous team doctor Pedro Celaya’s dismissal, and continued to advise them until he was convicted of sporting fraud in October 2004.

Ferrari not only had expertise in the field, but his extensive contacts allowed him access to information that kept Armstrong’s team one step ahead of drug testers.

His knowledge of Conconi’s EPO test allowed him to devise ways in which to narrow the window of detection, or cheat it altogether. Upon discovering that the window of detection was narrowed significantly when EPO was administered directly into the vein, Ferrari began advising all of his riders to do exactly that. Armstrong reportedly cycled and made public appearances wearing make-up to cover up the bruising that such intravenous injections caused.

Through the process of injecting intravenously, Ferrari managed to narrow the detection window down to a mere 12 hours, meaning cyclists could inject at night and turn up for the next stage the next day, safe in the knowledge that they could escape punishment. Despite seemingly thwarting the EPO test, Ferrari still encouraged riders to engage in the practice of blood doping, a way in which riders could boost their stamina that remained undetectable.

Conconi’s test for EPO was inducted in 2000, but blood doping was significantly harder to catch. According to witness testimony cited in the report, Ferrari continually sought to switch riders to blood doping, citing a lack of comprehensive testing regime, in order to stay one step ahead of the testing regime.

The process of blood doping is relatively simple. A month before the Tour, riders would have around 500ccs of blood drained and stored, with it being infused into their bodies during the tour. In doing so, the blood’s oxygen carrying capacity is increased, increasing a rider’s stamina and recovery.

Still notoriously difficult to detect, a test capable of identifying autologous blood transfusions is still being worked upon by WADA, with the testing parameters being kept under close wraps to avoid disclosure.

As testing methods catch up with the riders’ deceit, it is only now that the extent of Armstrong’s doping has been uncovered. Although EPO was not tested for during the 1999 Tour de France, blood samples of riders were still taken. In 2004, some samples were retrospectively tested for banned substances, with six positives identified. After a positive was linked back to Armstrong, UCI and Armstrong both blocked USADA from further analysis of said samples.

“Still notoriously difficult to detect, a test capable of identifying autologous blood transfusions is still being worked upon by WADA.”

It has also been revealed that an analysis of a Lance Armstrong blood sample during the 2001 Suisse Tour was deemed ‘suspicious’, but was not chased up. During the early years of EPO testing, the parameters of a positive test were kept reservedly high at around 85%. These have since been lowered as more faith has been placed in the test, with more qualifying criteria added. Armstrong’s ‘suspicious’ test from 2001, if tested now, would be declared as positive for EPO. However, UCI and Armstrong have once again blocked further analysis of this particular sample.

As suspicion around Armstrong’s achievements grew, more scrutiny was placed upon blood samples taken during his comeback at the Tour de France in 2009 and 2010. Expert analysis of these samples saw that Armstrong’s blood contained low numbers of reticulocytes, immature red blood cells that are created naturally. This deficiency hinted towards a sustained campaign of blood doping, with scientists stating that the chances of this occurring in Armstrong’s blood naturally to be “less than one in a million”.

Staying ahead of the game: lessons to be learned

The exposure of Lance Armstrong, once the poster-child of professional cycling, has dealt the sport a hugely damaging blow. Although suspicions have dogged him, Armstrong was still held in high regard by his contemporaries and heralded as being responsible for the sport’s huge growth in exposure.

Cycling and those tasked with controlling the sport must now learn from the findings of USADA’s report, increasing their understanding of the measures in which athletes will go to in order to succeed. Pharmaceutical science is developing at a speed capable of supporting such an approach, but USADA has been quick to highlight the human element of the Armstrong case. Witness intimidation and Ferrari’s work in uncovering secrets of doping tests are repeatedly referenced, perhaps signalling that there is only so much pharmacology can do to uncover cases as severe as this one.