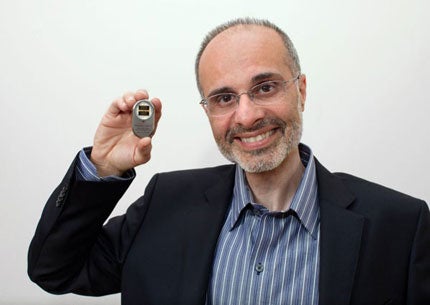 Reducing pain and improving symptoms is the aim of the game for Big Pharma, and in theory popping pills or taking injections are effective ways to do it. In practice, however, the flaws of human nature come into force. People don’t always remember to take their treatment or may not bother if it is intrusive or painful.

What if there was a better way? What if a chip filled with wirelessly controlled drug doses could be implanted inside the body so patients would never have to worry about medication again? In February 2012 a Massachusetts Institute of Technology (MIT) clinical trial, published in Science Translational Medicine and titled ‘first in-human testing of a wirelessly controlled drug delivery microchip’, successfully did just that: embedded a microchip.

"Compliance is very important in a lot of drug regimens, and it can be very difficult to get patients to accept a drug regimen where they have to give themselves injections," says one co-author of the paper, MIT Professor Michael Cima.

"You could literally have a pharmacy on a chip," adds MIT Professor Robert Langer, another co-author of the paper. But will this technology ever reach mainstream healthcare and what will it mean?

"The device is also perfect for older people who are more likely to need a concoction of pills because it can be filled with more than one drug."

The trial, carried out by researchers from medical microchip company MicroCHIPS, along with MIT, used programmable implants to deliver an osteoporosis drug to seven women of post-menopausal age.

The drug, teriparatide, which is usually delivered via injection, was implanted in the patients during a 30-minute procedure under local anaesthetic and remained there for four months. The researchers found the device delivered dosages comparable to injections with no adverse side-effects.

The success of this first clinical trial could be life-changing for the one in three women and one in five men at risk of an osteoporotic fracture, based on International Osteoporosis Foundation statistics.

But, Robert Farra, lead author of the paper and president and chief operating officer at MicroCHIPS, believes osteoporosis is just the tip of the iceberg. "Any disease that requires injections on a routine or scheduled basis [such as] osteoporosis, multiple sclerosis, diabetes, as well as pain management and fertility control, will benefit from this technology," he says.

The device is also perfect for older people who are more likely to need a concoction of pills because it can be filled with more than one drug.

"We all know parents or grandparents that have to take a variety of pills everyday so they carry around little labelled boxes to try and keep it all straight. For some of these patients having a microchip where they don’t have to remember which pill to take and when will make a big difference," explains Farra.

Re-evaluating the way we take medicine

The physical act of swallowing a tablet or having an injection can make a patient feel better. In fact, the American Cancer Society states a placebo ‘can have an effect in about one out of three patients’. But, Farra argues, being able to forget about your medication is equally as important.

Recovering drug addicts, for example, need a small fix to keep them going. The chip means "once the physician believes the patient is in full recovery they can be weaned off the medication without having to do anything," he explains.

Similarly, pain can be a cue for taking medication but an automatically released dose could prevent pain from kicking in. Not to mention the fact it could enable doctors to re-evaluate the way we take medicine.

"For drugs that have side-effects, those side-effects might be less obvious if the drug was released at 2am in the morning while the patient is sleeping," argues Farra.

A wirelessly controlled drug inside the body could be quite dangerous in the wrong hands. "I think the first aspect is to ensure the device is secure and only authorised individuals are able to access the device, so we’ve built in lots of ways to ensure that happens," says Farra.

""You could literally have a pharmacy on a chip," adds MIT Professor Robert Langer, another co-author of the paper."

Current versions of the device can be pre-programmed or triggered remotely over a distance of a few inches by a special frequency called the Medical Implant Communication Service. The researchers plan to extend this range in future, but Farra insists that "once programmed the implant can be instructed to ignore radio signals and its internal microcontroller can handle all instructions and dose releases".

The research team has also explored failure modes, which includes having protocol language so the user and device can communicate only with each other.

This type of technology will give doctors more control over patient medication after they leave the surgery, but this shouldn’t change the doctor-patient relationship.

"It’s their [the patient’s] choice so if at any point the patient decides they no longer want to take that medication they can have access to the implant and change it or they can go and see their physician and their physician can modify it," explains Farra.

Cost-effective from the start

"The first clinical trial was completed earlier in 2012 but the researchers are optimistic that it won’t be long before the device becomes more widely available."

It can take years for new technologies to be cost-effective but compared to the drug teriparatide, implanted as part of the trial, the microchip is cost-effective right from the start.

Teriparatide is usually injected with a pen that costs $10,000-$12,000 a year, but the inconvenience of daily injections and not seeing any immediate symptom improvements means about 75% of US patients pay for the course but do not complete it.

"Right out of the gate, the microchip is cost-effective with an existing regimen and that’s not accounting for the overall impact on healthcare costs as now patients are going to be healthier."

The current chip is best suited to potent drugs so cannot replace all types of medication, but Farra is confident pharma companies will be "able to come up with more effective medicines so they require smaller doses".

The first clinical trial was completed earlier in 2012 but the researchers are optimistic that it won’t be long before the device becomes more widely available.

"We estimate that our development of the next-generation implant will be complete in two years, followed by another two years of clinical trials. Therefore the device will start to be available four to five years from now," Farra believes.

Farra is also convinced that at some point in the future it would be "absolutely" possible for the chip to hold a lifetime’s supply of medicine.

"We’re working on techniques so that each reservoir will contain not only the drug but a controlled release mechanism for the drug, so instead of one reservoir per day, it could be one reservoir per month. You can envision that if we have 400 reservoirs and each one is capable of holding enough medication for one month, we’re looking at 400 months of medication, which is within the 30 year range."

It may be a few more years before chips become a major player in mainstream healthcare but automatically released medication will result in 100% compliance, which "translates into improved outcomes and healthier lives".