When we think of new technologies in medicine, we tend to conjure images of futuristic AI computers, 3D-printed organs, and robot surgeons. The ambitious and lesser-explored methods currently being applied in drug discovery and development, however, could prove to be just as exciting.

Delivering rapid bioanalytical data is critical to drug development. From drug discovery, through to preclinical and clinical studies, understanding drug exposure and behavior are imperative to dose selection, and accelerating drugs to clinic and commercialization.

Through the use of robust bioanalytical techniques, biological samples can be processed and analyzed to identify and quantify compounds of interest, such as small molecules and their metabolites, as well as peptides, proteins, nucleic acids and other analytes. 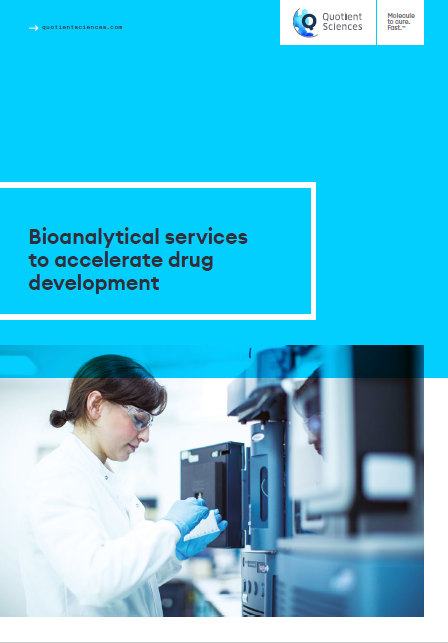 A GlobalData survey this year revealed that over 70% of pharma industry respondents anticipate drug development will be the area most impacted by the implementation of smart technologies. As the year draws to a close, Pharmaceutical Technology takes a look at some of the technological innovations and approaches that could transform drug research in 2022.

Supercomputers are vastly superior to general-purpose computers in terms of speed and performance, and are particularly valuable when it comes to performing scientific and data-intensive tasks. It makes sense, then, that researchers are looking to apply supercomputing to the exhaustive process of drug discovery and design.

This year, US tech company NVIDIA launched Cambridge-1, the UK’s most powerful supercomputer, to help British healthcare researchers solve some of the industry’s most urgent healthcare challenges. Along with the launch of Cambridge-1, NVIDIA also announced a series of collaborations with the pharma behemoths AstraZeneca and GlaxoSmithKline, and institutions like Guy’s and St Thomas’ NHS Foundation Trust, King’s College London and Oxford Nanopore Technologies .

The Cambridge-1 supercomputer has the potential to significantly accelerate and optimise every stage of drug research. NVIDIA is collaborating with AstraZeneca to build a transformer-based generative AI model for chemical structures, which will allow researchers to leverage massive datasets using self-supervised training methods and enable faster drug discovery.

GSK’s own research has a steadfast focus on  genetically validated targets, which are twice as likely to become approved therapies and now make up more than 70% of the company’s drugs pipeline. NVIDIA has partnered up with GSK and its AI team to unlock vast quantities of genetic and clinical data and help the company to develop more effective drugs and vaccines, faster.

While Cambridge-1 may be the most powerful supercomputer in the UK, Japan is home to the world’s fastest. Fugaku, jointly developed by research institute RIKEN and tech company Fujitsu , aims to tackle a range of pressing scientific and social issues. For healthcare, this means drug discovery through functional control of biomolecular systems, and integrated computational life science to aid the development of personalised and preventive medicine.

Despite only officially launching earlier this year, Fugaku has already proved valuable in identifying medicines that can be repurposed to fight Covid-19, narrowing over 2000 potential drug candidates down to just a few dozen. The Covid-19 research project employing Fugaku’s supercomputing capabilities to uncover potential therapies will run until March next year.

Gene editing – the insertion, deletion, modification, or replacement of DNA in a genome – is a promising and relatively new approach to treat genetic disorders. Newer still is the concept of gene writing to tackle inherited disease.

Pioneered by Massachusetts-based Tessera Therapeutics, the technique involves writing therapeutic messages directly into the genome to correct disease-causing genetic errors – and the company says the technology has the potential to target virtually any inherited disorder at its source.

Gene writing is based on using mobile genetic elements (MGEs), a type of genetic material that can be inserted into specific locations within a genome, using DNA or RNA templates.

Tessera only launched in 2020, but has already caught the attention of investors and researchers alike; the company raised an impressive $230m in Series B financing early this year, and last month announced an R&D collaboration with the Cystic Fibrosis Foundation.

Tessera’s co-founder and chief innovation officer Jacob Rubens said the company plans to continue to advance it gene writing technology in the next year.  “By delivering our therapeutics with RNA and lipid nanoparticle technologies, we believe it may be possible to revolutionise healthcare by making genetic medicines widely available for many diseases in diverse geographies.”

Spanish biotech Integra Therapeutics , founded last year, has also thrown its hat into the gene writing ring. Just this month, the company secured €4.5m funding towards the next-generation gene writing tools that it’s developing to make advanced therapies safer and more effective. The funds will also allow the company to carry out preclinical validation using in vivo and ex vivo models, and manage its patent portfolio in 2022 and the year after.

Integra CEO Avencia Sánchez-Mejías told Pharmaceutical Technology the company’s focus for next year is developing “a really strong proof of concept and a final prototype”.

Applying computational methods to drug discovery is nothing new, but the use of ultra-efficient quantum computers to reveal previously unknown compounds has only recently emerged as an area of promise.

Australian-German Quantum Brilliance is one company on a mission to make quantum-powered drug discovery a reality. Founded in 2019, the start-up is developing diamond quantum accelerators that can simulate interactions between multiple molecules for in silico drug discovery and design.

“Our goal for 2022 is to demonstrate the concept and value of distributed quantum computing (QC) for computational chemistry as part of our software stack,” says Quantum Brilliance ’s chief scientific officer Marcus Doherty.

While QC is still in its infancy, Doherty says, industry players have acknowledged its potential to revolutionise medical research – and the spate of deals made between QC groups and major drug companies this year is proof that the pharma industry isn’t waiting to get involved.

More recently, in November, digital QC company SeeQC announced that its UK-based team had been awarded a £6.85m grant from the country’s government agency Innovate UK. With the funding, SEEQC will build and deliver a full-stack quantum computer to be used for drug development by German multinational Merck KgaA.

“The demonstration of quantum utility – defined as a quantum system outperforming classical processors of comparable size, weight and power in similar environments – could become valuable for the discovery of new materials and new medicines,” Doherty says.

To know more about pharma & healthcare forecasts and trends that are likely to make an impact in 2022, catch more of our coverage here;

Revealed: countries with the most hospital project completions in 2022

Delivering rapid bioanalytical data is critical to drug development. From drug discovery, through to preclinical and clinical studies, understanding drug exposure and behavior are imperative to dose selection, and accelerating drugs to clinic and commercialization.

Through the use of robust bioanalytical techniques, biological samples can be processed and analyzed to identify and quantify compounds of interest, such as small molecules and their metabolites, as well as peptides, proteins, nucleic acids and other analytes.

What do companies need from COP27?