Schizophrenia Awareness Day, marked on 25 July, is a national observance that aims to raise awareness about this mental illness. Schizophrenia is a chronic brain disorder that affects a person’s ability to function, such as thinking and feeling. According to GlobalData’s Epidemiology and Market Size database, epidemiologists estimate there are more than 21 million prevalent cases within the tracked 16 countries. Recent studies have also discovered that schizophrenia is the second biggest risk factor of mortality from Covid-19.

For the last five years (2017 to 2021), there has been a steady increase in the total number of schizophrenia clinical trials by trial start year, apart from 2020, a decrease that may be due to the focus on Covid-19 relief. Last year saw the most with 167 trials. This trend could indicate more research and development (R&D) expenditure on the disease. 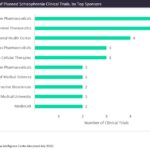