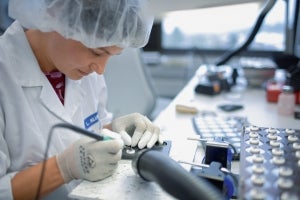 "2012 was not an easy year," underlined CEO Klaus Endress at the presentation of the financial results on 28 May 2013 in Basel, Switzerland. In some markets sales dropped, but in many others the Group recorded growth. "In the end we only just missed our ambitious targets." Undeniably, a little luck played a role. The company remained largely unaffected by currency influences; developments in the foreign exchange rate even slightly supported the business. But, above all, Endress+Hauser made the best possible use of the opportunities that the past year offered – despite all the risks.

Endress+Hauser increased net sales by 11% to almost €1.7bn. Despite higher depreciation and amortization, the operating profit (EBIT) almost kept pace, increasing by 10% and ultimately reaching €273m. Owing to a higher tax rate, net income rose by only 3% to €183m, which is nevertheless a new record.

Development across a wide base

Endress+Hauser showed growth across all regions, with exceptionally good developments in the Americas. "In the United States this was the third good year in succession for us," explained COO Michael Ziesemer, the CEO’s deputy. Low energy prices have sparked re-industrialization in the USA. In contrast, business in China showed disappointing development. This was, as Michael Ziesemer explained, "an unusual experience" after years of dynamic development.

The development of the Group was broad-based across all customer industries. The strongest growth was seen in the oil & gas and the power & energy industries, followed by the chemical, food & beverage, life science and water & wastewater industries. "Key drivers behind our growth are megatrends such as energy, resources and efficiency, food, water and demography," emphasized Michael Ziesemer.

Despite the good figures, according to Klaus Endress uncertainty could be felt throughout the year. "We hired fewer people than we had originally planned," he said. By the end of 2012 Endress+Hauser employed 10,066 people worldwide – 652 more than the previous year. 272 employees joined the company in Europe, with 162 in the German-French-Swiss region around Basel, where the two largest production plants, several Group companies and the holding company are located.

The fact that headcount passed the 10,000 mark last year is owed to the acquisition of SpectraSensors. The US company with about 90 employees develops, makes and markets laser-based gas analyzers. Under the umbrella of Endress+Hauser, SpectraSensors aims to open up new markets. Endress+Hauser also strengthened its calibration business. A share in the Irish company CompuCal Calibration Solutions secured access to software for calibration management.

A new sales center in Saudi Arabia began to operate in 2012. Another example of stronger activity in the Middle East was the opening of a sales office in Abu Dhabi, in the United Arab Emirates. In addition, Endress+Hauser opened a representative office in Vietnam’s Ho Chi Minh City. At the turn of the year a sales center was founded in Indonesia. A further sales center is to follow in Algeria in the coming year – the 46th sales company in the Endress+Hauser network.

At €127m the Group’s investments have reached a new high. Most of this was spent on expanding production facilities, particularly in Maulburg and Gerlingen, Germany, and Greenwood, Indiana/USA. By no means the biggest but certainly the most important project was a new production facility in Itatiba near São Paulo. Endress+Hauser expects this to have a significant impact on business in Brazil as in the rest of the South American continent.

As CFO Dr Luc Schultheiss explained, the Endress+Hauser Group was able to further strengthen its financial power. Equity was increased by three percentage points to over 73%. At the same time the company repaid another 30 million euros in bank loans, reducing liabilities below 10 million euros. Cash and cash equivalents amount to €389m. The exchange rates had hardly any impact on the 2012 financial results.

Endress+Hauser has set itself ambitious targets for 2013. Net sales are expected to grow by 10% to almost €1.9bn. For operating profit and net income, the company expects a moderate decrease. This is where investments in buildings and plants, software and IT of a record-high €160m come to bear, as well as increased expenditure in research and development. 550 additional jobs are to be created by the end of 2013. At present, Michael Ziesemer confirms, figures are slightly "below budget". Whereas sales in China are again showing strong growth, the development on the US market lags behind expectations.

In only eight years Endress+Hauser has more than doubled its net sales. "The opportunities for us have grown, along with the risks," emphasized Klaus Endress. In order to make the company fit for future challenges, sales support has been reorganized at Group level.

"We don’t expect 2013 to be an easy year," stressed Klaus Endress. "The problems which have made our world so insecure and changeable still exist." This was one of the reasons why the change at the top of the company was announced so early. Klaus Endress will move to the Supervisory Board in 2014 where he will succeed Klaus Riemenschneider as president; his successor as CEO will be Matthias Altendorf, currently managing director of the Group’s largest production center in Maulburg, Germany. Klaus Endress said "We have taken significant steps in terms of organization, strategy and personnel to set the course that will lead the company towards a successful future."

Around 35 Open Integration programme partners gathered together at Endress+Hauser in Reinach, Switzerland, to share...

Endress+Hauser experienced strong growth across all regions, sectors and product areas in 2018. The ongoing...

In industrial process measurement and automation, demand is steadily rising for simple, reliable and maintenance-free...

Switzerland has a sense of tradition and passion for technology. Endress + Hauser combines both....