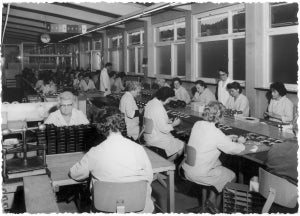 The specialist for measurement and automation engineering is in fine fettle in its 60th year: the family-owned company has just welcomed its 10,000th employee. In the last year alone, over 500 jobs were created worldwide.

A global network of companies, a range of high-quality products and solid family-based foundations: 60 years after its foundation, the measurement engineering specialist Endress+Hauser still continues to expand. This success is due to the continuity of a prudently run family-owned business whose first and foremost principle is to satisfy customers’ needs and requirements. ‘First serve, then earn’ was one of the mottos of company founder Georg H Endress (1924 – 2008) – and it has lost none of its validity to this day.

Headquartered in Switzerland, the company is today the world leader in measurement and automation engineering, with products synonymous with precision and reliability. The company’s independence, fully owned by the founder’s family, has been laid down in a charter and is bound to be upheld in future. Firmly anchored are also the fundamental principles of the Endress+Hauser Group: a corporate culture resting on trust and a sense of responsibility is the solid groundwork for sustained growth and technological innovation. This ‘Spirit of Endress+Hauser’, filled with life by the company’s leadership, makes values such as modesty, loyalty, commitment and fairness the compass points for entrepreneurial actions.

From the device to the system

The last 60 years have left their mark on the Endress+Hauser Group – in the positive sense: the vendor of devices and instruments became a full-range supplier who supports its customer in operating their plants reliably, efficiently and environmentally compatible throughout their entire life cycle. "Our strength is that we are entirely driven by the market," says CEO Klaus Endress who manages the company in the second generation. "We learn from our customers and strive to create sustained and outstanding benefits and value for them."

Today, over 40 sales centres and over 70 representatives around the globe sell products, services and solutions delivered by Endress+Hauser and production sites in 12 countries are engaged in manufacture and development. Thanks to the global roots in various different regions and industries, the Endress+Hauser Group is well able to cope with cyclical fluctuations. The lean and highly networked organisation guarantees flexibility and rapid response.

Almost coinciding with the 60th anniversary, another remarkable landmark has been reached – the company welcomed its 10,000th employee. Around 500 new jobs have been created worldwide in the last 12 months alone. Continuity is held high in the family-owned business: in spite of the finance and public debt crisis in 2009, no employees were laid off – with the result that a new sales record was promptly accomplished in the following year after the economy had begun to recover.
Outlook

With sales totalling €1.5bn, the Endress+Hauser Group marked up another record year in 2011 – in spite of a strong Swiss franc and a flagging economy in Europe. "Although the market is extremely volatile today, 2012 will be an excellent year for us," says CEO Klaus Endress. "We trust in our strength and look ahead with confidence, but we must stay alert." With well-targeted acquisitions in biotechnology, gas analysis and energy management, Endress+Hauser has recently rounded off its product portfolio. With an equity ratio of over 70 percent, the company is largely independent of lenders and is well equipped to meet the challenges of the future.

It all began rather small and inconspicuous: on 1 February 1953, Swiss engineer Georg H Endress and German banker Ludwig Hauser set up their company in a backyard in Lörrach, Germany. The first level measurement instrument was patented just two years later and these innovative measurement instruments soon enjoyed a good reputation in the industry. As early as 1957, sales exceeded one million Deutschmarks.

In the 1960s and 1970s, the fields of operation were expanded to include flow, temperature, pressure and analysis, with new production sites built or bought for development and production. With a growing number of sales partners, Endress+Hauser gradually conquered first the European market and the Asian and the American markets soon followed. After Ludwig Hauser’s death, the Endress family became sole shareholders in 1975. At that time, the company had around 1,000 employees. 15 years later, the headcount reached 4,000 with sales in excess of Sfr 500m.

At the dawn of the digital transmission and communication era around 1990, Endress+Hauser was actively involved in various fieldbus initiatives. In early 1995, the company founder placed the business in the hands of his second eldest son Klaus Endress who runs it to this day. Responding to the challenges of globalsation, Klaus Endress developed the international network of production and sales, while at the same time steadily expanding – and still expanding – the service range (project planning, maintenance, calibration) and extensive automation solutions (monitoring, control, system integration).

Around 35 Open Integration programme partners gathered together at Endress+Hauser in Reinach, Switzerland, to share...

Endress+Hauser experienced strong growth across all regions, sectors and product areas in 2018. The ongoing...

In industrial process measurement and automation, demand is steadily rising for simple, reliable and maintenance-free...

Switzerland has a sense of tradition and passion for technology. Endress + Hauser combines both....