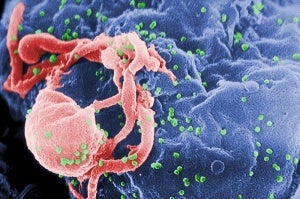 Researchers in France say that early and aggressive treatment with HIV drugs can functionally cure about one in ten infected.

The revelation, made by researchers at the Institute Pasteur in Paris, follows analysis of 14 people who stopped therapy, but have since shown no signs of the virus resurging, the BBC reported.

Dr Asier Saez-Cirion, from the institute, told the BBC that 5-15% of patients in the study may be functionally cured, whereby they no longer needed drugs because the virus was attacked soon after infection.

The study group of patients, known as the Visconti cohort, were all diagnosed with HIV infection and given treatment up to ten weeks after contracting it.

This is unusual, as usually patients aren’t diagnosed until later when the virus has fully infiltrated their body.

The Visconti patients continued taking the antiretroviral drugs for 3 years on average and then stopped treatment, which is when the virus normally comes back, however, some of the patients have been able to control their HIV levels for a decade.

Saez-Cirion said; "They still have HIV, it is not eradication of HIV, it is a kind of remission of the infection."

The researchers, however, are unsure as to why only some patients experienced this remission and not others.

This latest study, details of which are published in the journal PLoS Pathogens, comes following reports a baby girl was effectively cured of the infection after having very early treatment in the US.

Cardiff University School of Medicine reader in infectious diseases Dr Andrew Freedman warned that many patients will typically be diagnosed much later than those in the study.

Speaking to the BBC, he added; "Whether they’ll control it forever, or whether it’ll be for a number of years and subsequently they will progress and the virus will reappear, we don’t know."

National AIDS Trust chief executive Deborah Jack said; "These are exciting times and today’s study is further evidence that we are getting closer to a cure for HIV. What is telling in both the functional cure in the USA and in latest study in France is that early treatment was key to the success."

Image: HIV patients are not normally diagnosed as early as in the study, and often the infection has infilterated their system before treatment can be given. Photo: Courtesy of CDC Public Health Image Library.