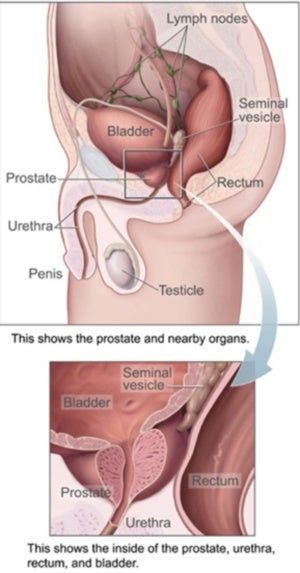 Patches delivering oestrogen through the skin may be an effective treatment alternative to current hormone therapies for prostrate cancer patients, a study by Imperial College London has found.

The Cancer Research UK-funded study discovered that oestrogen patches reduced levels of testosterone in men, a hormone that helps the cancer grow, to a similar extent as the current hormone treatment, LHRHa injections.

The results of the trial, which involved 254 men with locally advanced prostate cancer or prostate cancer that has spread, are published today in the Lancet Oncology journal.

The trial showed that patches appeared to suppress testosterone levels to a similar extent as LHRHa without causing the same degree of heart and blood clotting problems, which are known to be caused by oestrogen tablets.

Significantly, researchers also found those having the LHRHa treatment had higher blood glucose and cholesterol levels, which can increase the risk of heart disease compared to men treated with patches.

In order to halt the progression of prostrate cancer, testosterone must be reduced as the cancer needs the male hormone to grow.

Oestrogen is a known treatment for this, however, in the 1960s, oestrogen tablets were known to cause heart and blood clotting side-effects for some men.

Since then, LHRHa injections have been the main treatment for reducing testosterone, but these may also cause serious side-effects including osteoporosis, bone fractures and diabetes.

Study author from the Medical Research Council Clinical Trials Unit, Dr Ruth Langley, said; "These promising new findings suggest that we might be able to use oestrogen patches or an oestrogen gel to treat prostate cancer without significantly increasing the risk of heart disease and stroke.

"We think the reason oral oestrogen caused these side effects is because the oestrogen reached the liver in high concentrations straight from the stomach, whereas if the oestrogen can be absorbed through the skin the effect on the liver is avoided."

Honorary consultant in urology at Imperial College Healthcare and study author from Imperial College, London Professor Paul Abel, said the next step is to test whether oestrogen patches are as effective at stopping the growth of prostate cancer as the current hormone treatments, which they are now testing in 660 patients

Ninety year old prostate cancer patient from London, John Reynolds, said; "I was diagnosed three years ago and I was given a choice of going for injections or patches. I chose patches and it’s been a marvellous treatment – within a month or two I had no pain or blood."

Image: Oestrogen patches could provide a less painful treatment option with fewer side effects than the current standard treatment.