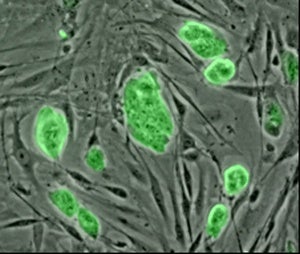 Two scientists have jointly been awarded a Nobel Prize for their work in ‘revolutionising’ stem cell research by changing adult cells into stem cells.

The Nobel Prize committee announced John Gurdon from the UK and Shinya Yamanaka from Japan were awarded the prize on 8 October for their separate work in the field of stem cell research.

In 1962 John Gurdon discovered the specialisation of cells is reversible. Scientists had previously believed that once the cell was specialised it could not be changed back.

Gurdon made this discovery by replacing the immature cell nucleus in an egg cell of a frog with the nucleus from a mature intestinal cell. This modified egg cell developed into a normal tadpole, while the DNA of the mature cell still had all the information needed to develop all cells in the frog.

His discovery led to the creation of the first cloned sheep, known as Dolly.

Forty years later in 2006 Shinya Yamanaka discovered how intact mature cells in mice could be reprogrammed to become immature stem cells by introducing only a few genes.

Yamanaka could reprogramme mature cells to become pluripotent stem cells – immature cells that could turn into types of cells in the body.

"The eventual aim is to provide replacement cells of all kinds starting from usually obtainable cells of an adult individual."

Both discoveries have led to better understanding of how stem-cells work. Skin cells can now be obtained from patients with various diseases and examined in the laboratory to determine how they differ from cells of healthy individuals.

It is hoped the longer term benefits of Gurdon’s and Yamanaka’s discoveries will lead to scientists being able to use a sample of a person’s skin to create stem cells and use them to repair parts of the body, such as the heart after a heart attack.

Prof Gurdon, now at the Gurdon Institute at Cambridge University, explained his research to the BBC website as: "Trying to find ways of obtaining embryo cells from the cells of an adult.

"The eventual aim is to provide replacement cells of all kinds starting from usually obtainable cells of an adult individual. For example, we would like to be able to find a way of obtaining spare heart or brain cells from skin or blood cells."

The Nobel Prize committee told the BBC: "These discoveries have also provided new tools for scientists around the world and led to remarkable progress in many areas of medicine."

Image: Discoveries in stem-cell research led to the creation of Dolly, the first cloned sheep. Photo courtesy of the National Science Foundation.