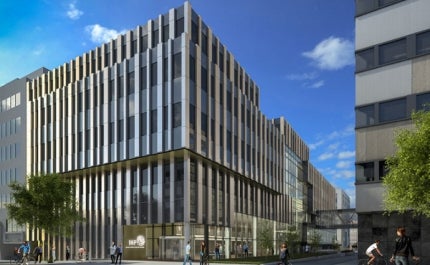 The construction of a new research premises for the Research Institute of Molecular Pathology (IMP) began in March 2015 at the Vienna Biocenter in the third district of Vienna, Austria.

The project was fully sponsored by Boehringer Ingelheim, which invested €50m ($54.53m) for the construction. The new building was opened in March 2017. It is one of the leading research institutes in molecular biology on a global scale.

The IMP building has a total floor space of 15,000ft². It has gross built area of 14,945m² and gross built volume of 66,854m³. It accommodates 250 researchers from 35 nations, and will be provided with sophisticated laboratories and office space.

The building includes a five-storey atrium under which the office and laboratory areas are arranged. It houses a spacious lecture hall, server room, a workshop and a cafeteria.

“The facility opens up new possibilities to further develop Vienna Biocenter in the future.”

A smooth glass facade stretches up the atrium from the ground to the fourth floor. The facade is transparent in the open areas. A bridge is used to connect it with the neighbouring building, so that the entire infrastructure is used.

The facility opens up new possibilities to further develop Vienna Biocenter in future. It brings about improvements in infrastructure, flexibility and new communication opportunities to achieve scientific results.

The facility is used to carry out research in cell and molecular biology, neurobiology, disease mechanisms and computational biology. It is used for the discovery of fundamental molecular and cellular mechanisms underlying complex biological phenomena.

It focuses on carrying out research on neural circuits in drosophila auditory perception and memory in the neocortex, spatio-temporal specificity of miRNA function, and stem cell commitment in haematopoiesis circuit mechanics of emotions in the limbic system.

Construction of Louis A Simpson and Kimberly K Querrey Biomedical Research Centre at Northwestern University began in May 2015.

The research topics include symmetry breaking during cell polarisation, learning and memory in drosophila, in addition to the molecular basis of migration, and molecular machines and mechanisms of protein quality control and antibody diversification.

Tonstructed using building information modelling (BIM), the IMP building complies with environmentally friendly methods. It has a resource-saving energy concept, which facilitates the recycling of most of the energy used in the building.