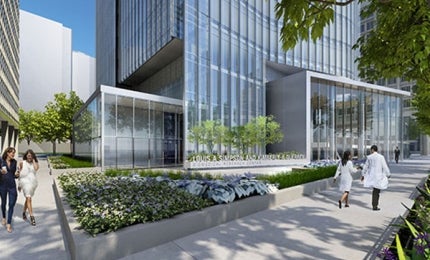 The construction of Louis A Simpson and Kimberly K Querrey Biomedical Research Centre at Northwestern University Feinberg School of Medicine in Chicago, Illinois, US, began in May 2015. The research centre is named after Louis A Simpson and his spouse Kimberly K Querrey, who are the Northwestern University’s trustees and alumni.

"The research centre is named after Louis A Simpson and his spouse Kimberly K Querrey, who are the Northwestern University’s trustees and alumni."

The new facility, expected to be opened for operations in late 2018, will enable new centres for research excellence, create venture space, and generate new startup companies and scientific discoveries that will save lives and improve health.

The research centre will be situated in a 12-storey building having a total floor space of 600,000ft². It will have nine floors of laboratory space containing sophisticated lab equipment. Each laboratory floor will have a 40,000ft² space, which can be used for accelerating the pace of discovery and heighten the collaborative nature of advanced research.

The laboratory floors will include flexible laboratory blocks known as neighbourhoods, which will accommodate teams of six to nine researchers. The neighbourhoods will also include offices for principal investigators, and formal and informal meeting spaces.

The construction of WTRB at the Geisel School of Medicine was initiated in 2013, and is expected to be completed by June 2015.

The new facility is being constructed as replacement to the Prentice Women’s Hospital in Chicago. The building will be connected to the adjacent Robert H Lurie Medical Research Centre. It will offer new research opportunities for high-quality research faculty, PhD students, and postdoctoral fellows as well as medical students, residents and clinical fellows. It will also lead the Northwestern University’s research facilities and will be a hub for the world-class research and development enterprises that attract innovation and entrepreneurship.

The facility will create employment opportunities for more than 2,000 people during construction phase and more than 2,500 permanent and full-time jobs after the completion of construction. It will also generate approximately $3.9bn in future economic activity in Chicago.

Perkins + Will Architects were selected to design the new biomedical research centre building in December 2013. The designs were provided by Ralph Johnson, global design director of Perkins + Will.

The new biomedical research facility will be constructed with the aim of achieving LEED Silver rating from the US Green Building Council. The building will feature a curved glass exterior, and a sunny winter garden area that will allow natural light into the building.