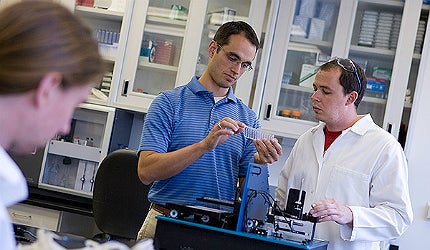 L.S. Skaggs Pharmacy Institute is a new research facility opened in April 2013 for the College of Pharmacy at the University of Utah (U of U) in Salt Lake City in the state of Utah itself, US.

The institute is dedicated to interdisciplinary research and development of new drugs for the treatment of diseases such as osteoarthritis, cancer and epilepsy, as well as wound healing. It is part of the Health Sciences Center of the University of Utah.

The pharmaceutical research complex is named in the honour of Leonard Samuel Skaggs, who along with his family’s ALSAM Foundation, contributed about $50m towards the new research centre, in 2007.

Construction of the facility was started in August 2009 and concluded in April 2013. The project cost more than $75m.

"The project included construction of a new 30,000ft2, five-storey Pharmacy Research Building on the site of a former car parking lot."

The Utah College of Pharmacy has been ranked among the top four institutes in the US by the National Institutes of Health (NIH). It is also the second best in pharmaceutical research productivity (only behind the University of California) and received $23m from the NIH in 2011.

The institute has so far screened 30,000 epilepsy compounds leading to the development of 11 new medications for the disease through the Anticonvulsant Drug Development Program. The college also provides research on new medication and drug delivery systems.

The new facility has been a long delayed plan of the University of Utah to provide additional state-of-the-art wet and dry research laboratories for the College of Pharmacy.

Design and facilities of the L.S. Skaggs Pharmacy Institute

The project included construction of a new 30,000ft², five-storey Pharmacy Research Building on the site of a former car parking lot. It is situated adjacent to the existing Skaggs Hall, the Pharmacy College facility built in 1965. The building was built with contributions from L.S. Skaggs, Sr.

A new glass atrium connects the new facility with L. S. Skaggs Sr Hall and provides spaces for faculty and students to gather in the cafe or in small lounge areas. The four floors of atrium space have elevators and meeting and studying areas. The fourth floor houses a state-of-the-art call centre and office suite for the Utah Poison Control Center.

The atrium also features an amphitheatre for presentations and other events at its west entrance. It is anticipated to promote scientific and medical interactions. It will also provide structural stability for the existing hall. The entire complex is renamed as the L.S. Skaggs Pharmacy Institute.

Sustainability at the Utah College of Pharmacy

The new laboratory facility is expected to consume nearly 30% less energy than similar university facilities. It is also expected to save about 79% of the domestic water through reuse techniques.

Contractors involved with U of U’s Pharmacy Institute

NBBJ Architects and EDA Architects were selected in 2009 to design the facility.

The NBBJ/EDA joint venture was also the master plan designer of the pharmacy campus.

Construction of the building was carried out by Jacobsen Construction under a $54m contract with the State of Utah.

Van Boerum & Frank Associates (VBFA) was the mechanical engineer and Envision Engineering was the electrical engineer.

Psomas was the civil engineering consultant. ArcSitio was the landscaping engineer. Atelier Ten was the environmental design and building services consultant.