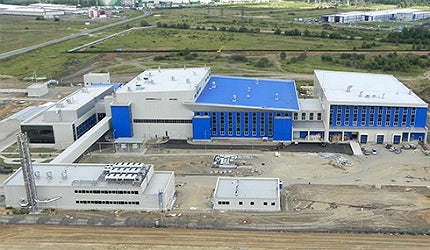 Takeda Pharmaceutical completed construction of a new manufacturing facility at Yaroslavl in Russia in September 2012. The new plant is located 280km away from Russia’s capital city Moscow. The first phase of commercial production at the plant began in September 2013.

The pharmaceutical plant was built at a cost of €75m ($97.4m). It manufactures liquid sterile products (ampoules and vials) and solid medicines (tablets) including actovegin, cardiomagnyl and calcium tablets for the Russian medical market.

The plant has a built-up area of 24,000 square metres (258,334 square feet). It obtained license to initiate production in December 2012 after successfully clearing inspection of the Ministry of Industry and Trade of the Russian Federation.

The plant features both liquid and solid production technologies. It is expected to manufacture approximately 90 million sterile ampoules and more than two billion tablets a year during the first phase of production.

Next phase of the development includes the beginning of the full production cycle, which is expected to begin in 2014. The company has already received registration certificates for each of the drugs from the Ministry of Health of the Russian Federation and plans to begin full cycle production in 2014.

General construction contract of the plant was awarded to PharmaGroup, a Russian engineering company that offers a full range of services for the pharmaceutical and medical industry.

PharmaGroup completed the plant’s construction within the stipulated time and according to local and international good manufacturing practice (GMP) standards. It has also strictly adhered to the latest safety and environmental standards.

Takeda is the largest pharmaceutical company in Japan. It has head offices located in Chuo-ku, Osaka, and the capital city of Tokyo.
It manufactures and markets drugs in 100 countries. The company has 17 in-house production plants, which are located across 14 countries.

In addition, it has three production bases located in Asia, which are run through joint ventures.

The completion of the new facility at Yaroslavl in Russia, enabled Takeda to make a direct presence in the Russian pharmaceutical market.

It is the only major pharmaceutical company that invested significantly to establish a manufacturing facility in Russia. It intends to tap the Russian market by producing blood substitute actovegin, heart attack preventive drug cardiomagnyl, aspirin and over-the-counter calcium tablets.

The plant at Yaroslavl will also consolidate production for the Russian market by avoiding import duties from sites in Austria, Germany and Norway.

Russia has the 11th biggest pharmaceutical market in the world, with sales passing $14.7bn in 2011. Takeda is well established in the Russian market, with the company’s sales growth expected to reach 11% a year by 2016.

"The plant manufactures actovegin, cardiomagnyl and calcium tablets for the Russian medical market."

The future pharmaceutical market in Russia is expected to change, with the government deciding to alter the coverage scheme, with effect from 2016.

Third-party reimbursement is rare in Russia, which made it a major market for branded generics. The market for the new drugs is expected to grow , although with the change in the government’s coverage scheme, it will be imperative for the companies to have sales and marketing infrastructure in place to produce established and innovative products. The new drugs must undergo clinical trials in Russia to receive a national license.

GSK, Teva and AstraZeneca are also planning to enter the Russian pharmaceutical market by establishing manufacturing facilities there.

In 2000 Searle Pharma (part of Pharmacia which combined/merged with Pfizer in April 2003) opened a $30m medication production plant in Izvarino, Moscow.

The plant was the first API plant built by Takeda outside Japan and complements the pharmaceutical finishing plant located in Bray, County Wicklow, Ireland.