European-based biotech total venture financing raised for innovator drugs is 4.5 times ($56bn) less than the total raised in the US from 2017 to 2022 (up to 27 May), according to GlobalData’s Pharma Intelligence Centre Deals Database. Both the US and Europe, however, saw venture financing reach an all-time high last year, with too many early-stage biotechs going public with inflated valuations.

In the current bear market, indices such as the US-based Nasdaq Biotechnology Index (NBI) and Europe’s Euronext Next Biotech index (BIOTK) have seen volatility with small- and mid-cap biotech stocks now plummeting. Investors therefore seem to be taking a more selective approach to investments in the biotech public markets. Could these challenges widen the venture financing gap between Europe and the US even further?

European-based biotechs historically raise smaller rounds of venture financing for innovator drugs, on average five times less for each quarter compared to their US counterparts since 2017, according to GlobalData’s Pharma Intelligence Centre Deals Database. The cumulative US-based biotech venture financing for innovator drugs reached a total of $72bn, whereas Europe lagged behind with only $16bn, from 2017 to 2022 (up to 27 May). 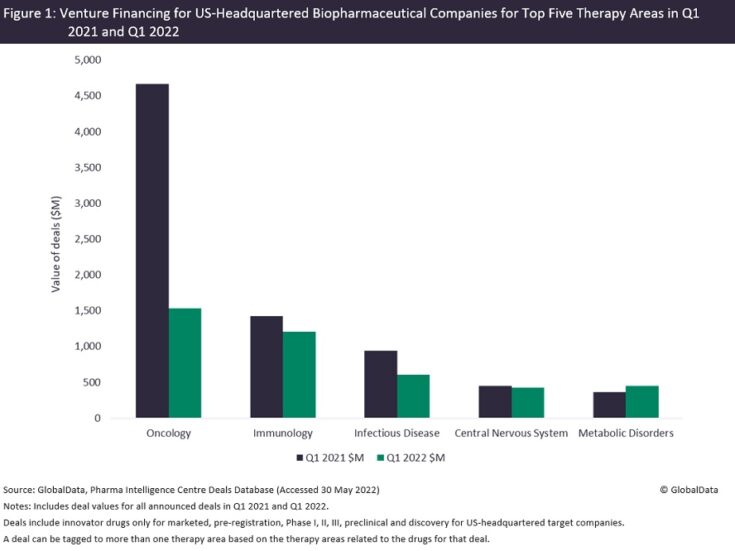 Covid-19 patent lawsuits: Will vaccine producers have to pay the bill?

The biotech venture financing gap between Europe and the US is growing, with European investors known to be more conservative when investing in non-revenue-generating companies compared with those in the US. Many European biotechs have, therefore, selected the US-based NASDAQ or New York Stock Exchange (NYSE) to list their companies, where initial public offerings (IPOs) are significantly larger than on European stock exchanges, allowing for more funding for growth.

The fall in biotech indices and low biotech valuations following the Covid-19 pandemic means US companies looking to buy may see European biotech start-ups as rich pickings. This could result in Europe’s biotech sector losing out to the US and, furthermore, to the Asia-Pacific (APAC) region, which is already starting to overtake Europe in venture financing, unless Europe looks to improve venture financing investments of biotechs, particularly those with late-stage assets to enhance the chances of generating revenue once listed on the stock markets.