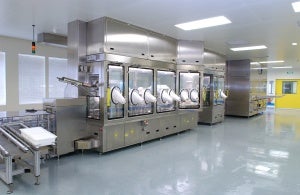 With the use of catalytic aeration, M+P is able to reduce the duration of the aeration phase in isolators by more than 50%. The aeration phase is the most time consuming process in the decontamination of isolators used for pharmaceutical filling and closing equipment. Decontamination with VHP (vaporous hydrogen peroxide) regularly takes place prior to production. Existing M+P isolators can also benefit from this with a simple upgrade.

Isolators are considered to be the safest method for guaranteeing a sterile filling environment in pharmaceutical production. Decontamination of isolators with vaporous H2O2; takes place in three process steps, which begins with the conditioning of the temperature and humidity. Next follows the sterilisation phase, in which a vaporized H2O2 fog kills off any viable microbes. Even in low concentrations, H2O2 can be detrimental to pharmaceutical products, so the final phase, aeration with fresh air, must be complete. Without the use of catalytic aeration, and depending on the allowable residual concentrations (usually <1ppm – 10ppb; largely dependent on the product), the average time required for aeration is between three and 12 hours. Using catalytic aeration, the aeration phase can be shortened by more than 50%.

A pilot project at a pharmaceutical company is being used to demonstrate catalytic aeration in practice. Further units will be installed shortly, and M+P has also carried out retrofit projects. For over two years, M+P has performed tests with catalytic conversion on a research isolator. The efficiency of the catalytic converters remained at 100%, and degeneration is not expected.

M+P is part of Optima Pharma (Schwäbisch Hall). M+P isolators are used in pharmaceutical turn-key projects on filling, closing equipment as well as loading and unloading of freeze drying units. Furthermore, the entire upstream and downstream process, including weighing isolators and sterility test isolators are part of the product range.