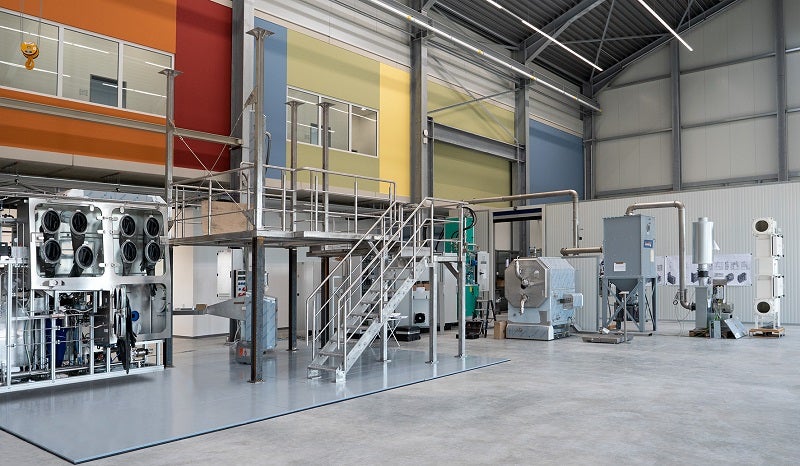 In March 2022, the time had come: After a good one-year construction period, LB Bohle started the production of the first machine in the new Plant 4. The new plant is the company’s third plant in Ennigerloh, Münsterland. In addition, LB Bohle still operates a production plant for handling components, blenders, mills and sieves in Sassenberg.

The focus of the new plant, which has been built within sight of plant 3, will be exclusively on the production of continuous machines and plants. On the 12,000m² site, LB Bohle operates a 2,000m² production complex according to the latest standards.

During the new construction, special emphasis was placed on sustainability and energy efficiency.

“The production facility was built in accordance with Energy Efficiency 55. This means that the building requires only 55% as much energy as a comparable new building that achieves the maximum permissible value according to the German Energy Saving Ordinance (EnEV),” explains managing director Tim Remmert.

By installing a photovoltaic system on the roof, energy is generated and additionally fed into the grid. “The entire production of the machines is done with 100% green electricity. As of this year, this also applies to all other locations,” Remmert continues.

The office heating systems in Plant 4 are supplied by state-of-the-art heat pump technology, and LB Bohle relies exclusively on LED technology for lighting. There are also sufficient (fast) charging points on the parking area to be able to charge e-cars.

Major project for the start of production

With a continuous production line from the QbCon® series to produce tablets by wet granulation, an extensive project is waiting for the Bohle team right at the start of production.

The complete plant consists of a QbCon® 1 for continuous wet granulation and drying and a mixing and dosing unit, each completely enclosed by an isolator made by Franz Ziel, a screen of the BTS 100 series, the tablet press XL 100 WipCon® by KORSCH and the semi-continuous coater KOCO® 25. The plant is fed by two automated lifting columns HS 400.

“Investing in the new plant was exactly the right thing to do, because it has given us the capacity for further company growth. Implementing the major continuous manufacturing project in the new plant is something special for the entire company,” comments Remmert in conclusion.