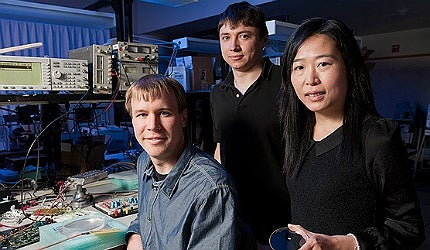 Science-fiction films have long depicted the creation of a medical device small enough to travel through the human bloodstream, diagnosing illnesses and delivering treatment before being safely removed. Despite advances in diagnostic techniques and the widespread use of laparoscopic cameras to conduct non-invasive, exploratory surgery, the emergence of such technology has remained a pipedream.

Newly developed technology demonstrated at the International Solid-State Circuits Conference (ISSCC) in February 2012, promises to do just that, with a wirelessly powered device small enough to propel itself through the human bloodstream.

"Future development of the system could include the attachment of a drug eluting system in allowing the precise delivery of drugs to specific areas of the body."

Although science-fiction films may depict the swallowing of a pill containing such a device, and despite the tag of ‘swallow-the-surgeon’ medical care reaffirming that vision, the device is actually to be injected or implanted into the human body before being ‘driven’ to its desired location.

The device itself is roughly 3mm x 4mm square in size, containing an antenna that is 2mm square, allowing it to travel through the body’s bloodstream in order to reach remote areas of the body.

The system comprises of a transmitter and antennae that are magnetically coupled, and the 1.86GHz carrier delivers 500uw to the device in order to power locomotion, reaching a speed of 0.5cm each second.

The concept of swallow-the-surgeon medical care is likely to feature heavily in the device’s future, with engineers keen to develop a drug delivery system to attach onto the device. This would feasibly enable physicians to prescribe a drug before having the device deliver it to the precise area in need of treatment, enhancing its efficacy.

A radio transmitter located outside the body sends signals inside the body to the independent device. The signal is registered with an antenna of coiled wire and, as a result of the transmitter and antennae being magnetically coupled, changes in the current flow produce voltage in the wire.

This wireless transfer of power allows electronics on the device to function without the use of batteries or wires, overcoming challenges and obstacles which had previously halted the development of such a device.

Medical devices, such as hearing aids or pacemakers, are the size they are due to their reliance on a functioning power source. While they remain stationary, their need for a power source is not necessarily problematic. Batteries are large and heavy, making up half of the volume of most medical devices, which renders them futile for use within a medical device whose task is to travel throughout the body.

Another option would be to transmit power through wires, connecting the device with an exterior power source. The risk of a wire breaking or becoming corroded as the device transverses through the bloodstream also meant that wireless power would be the only solution. 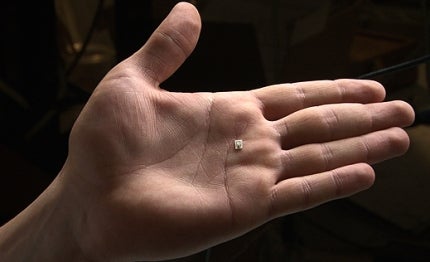 A prototype of the wirelessly powered device rests on a hand, displaying the small size of it. Image courtesy of Stanford News Service.

The device’s medical breakthrough would not have been possible without Ada Poon challenging long-standing thinking regarding the delivery of wireless power throughout the human body.

"The risk of a wire breaking or becoming corroded as the device transverses through the bloodstream also meant that wireless power would be the only solution."

Previous understanding of high-frequency radio waves allowed them to dissipate quickly when travelling through human tissue, with low-frequency signals understood to penetrate well.

This provided its own challenge, as the antenna required to receive a low-frequency signal would need to be centimetres, rather than millimetres, in diameter, rendering them impossible to manoeuvre through the human body.

Poon succeeded in challenging this misconception. Upon studying the models, she realised that while scientists assumed that human tissue was a good conductor of electricity, it is in fact the opposite. By modelling tissue as a low-loss dielectric – a type of insulator – she concluded that human tissue is a poor conductor of electricity, but that radio waves were still able to move through it.

She then recalculated, using a different set of equations, to discover that radio waves at high frequencies could travel much further in human tissue than previously thought.

"When we extended things to higher frequencies using a simple model of tissue, we realised that the optimal frequency for wireless powering is actually around 1GHz, about 100 timers higher than previously thought," said Poon.

This conclusion led her to the development of an antenna which is 100 times smaller, yet still capable of delivering sufficient power required by the device to operate.

"By modelling tissue as a low-loss dielectric, she concluded human tissue is a poor conductor of electricity, but radio waves could move through it."

Two such devices have been developed using Poon’s finding.

One device propels by driving electric current directly through the fluid, creating a directional force, whereas the other switches current back and forth through a wire loop, resulting in a motion similar to that of a kayaker using a paddle.

There is, however, still work to do. "There is considerable room for improvement and much work remains before these devices are ready for medical applications," said Poon, adding: "But for the first time in decades the possibility seems closer than ever."

Future development of the system could include the attachment of a drug eluting system in allowing the precise delivery of drugs to specific areas of the body, and even enabling them to remove blood clots or plaque from sclerotic arteries for the treatment or prevention of heart attacks.