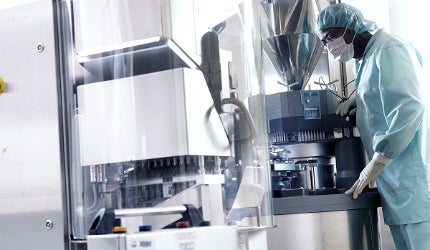 The delicate balance between quality assurance and production output will be familiar to most industries, but the stakes are rarely higher than in the world of generic pharmaceuticals. While generic medicines are an important means of providing patients with life-saving drugs at more affordable costs, the risk of contamination or counterfeiting of active pharmaceutical ingredients (APIs) can have deadly consequences, and the monitoring of supply chains has grown increasingly complex as the industry becomes more globalised.

2008 brought with it a serious wake up call concerning the risks of unsafe substances, when contaminated raw heparin imported from China caused more than 80 deaths in the US, and prompted safety scares in Europe and elsewhere.

"Manufacturing plants exporting to the EU must be inspected and, for each API they export, presented with a written document."

With these dangers in mind, the European Commission (EC) has passed new mandatory regulations for APIs imported from outside the European Union. Under the new laws, which will fully come into effect on 2 July 2013, APIs imported into the EU must comply with the good manufacturing practice (GMP) standards used by the EU, as stipulated by the International Conference for Harmonisation (ICH Q7).

Crucially, the new regulations place the onus of compliance on the regulatory bodies of the exporting countries, meaning that all manufacturing plants exporting to the EU must be inspected by their own national authorities and, for each API they export, presented with a written document confirming that the plant conforms to EU manufacturing standards.

In an industry that has struggled with a lack of guidance and standardised monitoring of imported medical substances in the past, the Commission's uncompromising new stance is certainly a positive step towards safeguarding the health and safety of patients.

As Warwick Smith, director general of the British Generic Manufacturers Association (BGMA) and executive of the European Generic Medicines Association (EGA), puts it: "Appropriate regulations to ensure the quality of medicines is something that we would always argue for, defend, and stand up for.

Although the new requirements will come as a relief for nervous patients, the reception from the generic manufacturing industry has been a little frostier. From a European perspective, companies believe that the change required to bring the world's regulators into line and maintain production could be too much for the industry to achieve before the July 2013 deadline, potentially leading to shortages of vital drugs.

"Some of the countries that export APIs to Europe - principally China and India - are bristling at the new regulatory burden."

After all, an estimated 15% of the EU's API imports come from India and China alone. "25% of our medicines in Europe are in danger of becoming unavailable after July 2013," said Actavis senior executive Gudbjorg Edda Eggersdottir at an EGA conference in June.

Smith highlights a concern in Europe that the regulation could have the unintended consequence of pushing generic manufacturing out of the continent altogether. "There are going to be specific requirements for the quality approval of API, but the same provisions don't apply to the import of finished dosage form products," he says. "So you have to have these quality systems for the API, but not for [the] finished form, which actually means it could be easier for manufacturers to manufacture outside the EU and then import, rather than import the API and then manufacture."

And on the other side of the world, some of the countries that export APIs to Europe - principally China and India - are bristling at the new regulatory burden that the EU's new regulations are placing on their shoulders. In some ways, the requirements could be seen as Europe arrogantly instructing local authorities on how to monitor their own industries.

Placing the burden on local authorities to bring plants to European standards certainly runs counter to statements by China in the aftermath of 2008's heparin contamination, in which a spokesperson asserted that API quality assurance checks were ultimately the responsibility of the purchasing countries. Indeed, India and China are reportedly considering jointly opposing the EU API regulation at the next meeting of the World Trade Organisation (WTO), under its technical barrier to trade (TBT) rules.

Preparing for the new requirements

"Regulators and industry now face a tough challenge to prepare for the new requirements."

For Smith and the BGMA, the issues surrounding the legislation have nothing to do with its fundamental principles, and everything to do with the clock that is counting down to July 2013. Regulators and industry now face a tough challenge to prepare for the new requirements. According to Smith, a lack of certainty about the steps that need to be taken is causing confusion and holding the process back.

"The key thing is that the exporting country has to give written confirmation of compliance to EU standards," says Smith. "What we are looking for from the Commission is clarification of just what will be acceptable and what won't. Because that can be quite a big ask for some countries, who might not be used to authorising plants to EU standard; they'll be used to authorising them to their own standards. And there might be a delay in getting all of that done - clarification on what will be necessary is crucial, and understanding of the rules once they've been clarified, between manufacturers in Europe and their API suppliers elsewhere, is also crucial to make sure this works effectively.

Another element of the regulation that needs to be quickly worked out is an exemption clause that allows countries that are deemed to have manufacturing standards equivalent to the EU's to skip the requirement for a written confirmation. But, again, with the general confusion about what needs to be done to get on to this list, time is a factor.

"Are they going to apply in time, and will the Commission do the bureaucracy in time to get them on that list? That's the imponderable," Smith says. "I think Switzerland has applied, and I don't think anybody would be surprised to find Switzerland on the list. I don't know where the US is, but one would hope that the US would apply."

Despite the slightly panicked pessimism that is being reported among European generic manufacturers, Smith is hopeful that with a strong enough push, the worldwide API supply chain can be adequately prepared to meet the requirements, thereby avoiding any drug shortages and the chaos that could follow such a crisis.

As for a joint Indian / Chinese revolt at the WTO, Smith is similarly sanguine. "I'd be surprised if countries like India and China wanted to cut off a large export market over something like this," he says. "I'd also be a little bit surprised if they felt there was a WTO complaint here. All I can say is that I know there were intergovernmental discussions with China three or four weeks ago, and I understand they went well."

Without a doubt, there is a general feeling among trade associations and industry bodies that if the EC's new regulations aren't properly clarified, there could be significant unintended ramifications for a major European market. But if the regulators, European manufacturers and extra-European suppliers can cooperate to create an effective roadmap to July 2013, this divisive new law could mark a major turning point for the protection of European patients and the improvement of quality standards worldwide.

The Chancellor’s Spending Review: transforming the UK into a ‘scientific superpower‘

The rise of gout: examining drug development for an age-old disease

Implementing the ballroom concept for biomanufacturing: Lessons, reflections and considerations from experience

Biogen and Sage Therapeutics to co-develop depression and tremor therapies

27 Nov 2020
Registration is disabled.
We use cookies to ensure that we give you the best experience on our website. If you continue to use this site we will assume that you are happy with it.ContinueLearn more