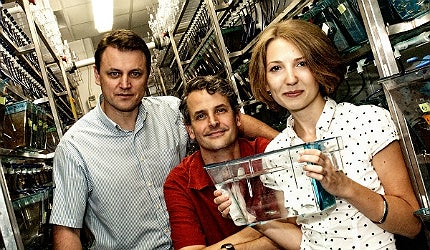 In the field of oncology, scientists have been able to show that nanoparticles can be introduced into cancer cells. Yes, these small devices, structures and processes that are sized from 1 to 100 nanometres, can find and kill cancer cells.

This discovery opens up the possibility that therapeutic materials can be introduced, in nanoscale, into cancer cells. Since tumours do not have effective drainage or lymphatic systems, there is the potential for nanoparticles to collect in the cells and remain inside the tumours.

If these nanoparticles are manufactured with multiple characteristics that will enable them to find and image tumours, it is also possible that they can treat the tumour once they have identified it. This provides the novel theranostic approach which unites diagnosis and treatment in one procedure.

"If these nanoparticles are manufactured with multiple characteristics that will enable them to find and image tumours, it is also possible that they can treat the tumour once they have identified it."

Northwestern University in Chicago, in the US, are the first to develop a simple, specialised nanoparticle which can deliver a drug directly to a cancer cell’s nucleus, which is an important feature for effective treatment.

They are also the first to directly identify how nanoscale particles interact with cancer cells. Teri Odom, lead researcher of a study on human cervical and ovarian cancer, says: "Our drug-loaded gold nanostars are tiny hitchhikers. They are attracted to a protein in the cancer cell’s surface that conveniently shuttles the nanostars to the cell’s nucleus."

It is then that the nanostars release the drug that will treat the cancer. Once bonded, when the area of the tumour is irradiated, the gold is heated sufficiently to kill the cancer cells without destroying healthy tissue.

While the shape of nanoparticles can vary, it has been found that nanostars, with several points for drug delivery, provide increased surface area for delivery to the cancer site. This increases efficacy of light beams sent to kill cancer cells.

Before nanostars, the challenge faced by scientists was releasing drugs from nanoparticles, but gold nanostars release drugs easily, leading Odom to believe that drug delivery via gold nanostars could be particularly useful in cases where tumours are close to the skin’s surface, such as with skin and some breast cancers.

Such ground-breaking research does not stop here. Some of the leading researchers within the field of nanomedicine for cancer treatment can be found at Rice University and Texas Medical Center in Houston, Texas. Experts there have found that a chemotherapy drug delivered into cancer cells with plasmonic nanobubbles is 30 times more lethal to cancer cells than traditional drug treatment, despite requiring less than one-tenth the clinical dose.

"In addition, more research is needed on human cancer cells as treatment efficacy is likely to vary individually and across cancers."

Dmitri Lapotko, a scientist at Rice University, says: "By avoiding healthy cells and delivering the drugs directly inside cancer cells, we can simultaneously increase drug efficacy while lowering the dosage."

This is a huge development in the world of targeted cancer treatments. Previously, nanoparticles designed to target cancer cells could also kill healthy cells, leading to a number of adverse side-effects for patients.

It is important to note here that the nanobubbles being tested at Rice University are not nanoparticles. They are tiny pockets of air and water vapour that are created when laser light strikes a cluster of nanoparticles and is converted into heat.

The bubbles explode just below the surface of cancer cells and this process creates small holes in the cancer cells, through which drugs can be delivered. Dr Malcolm Brenner, professor of medicine at the Baylor College of Medicine in Houston, Texas, says: "The nanobubble injection mechanism is an entirely new approach for drug delivery that holds great promise for selectively targeting cancer cells that are mixed with healthy cells in the same culture."

The benefit to the patient of the exciting and innovative discoveries of nanostars and nanobubbles is that such methods are selective and targeted specifically at the cancer cells, meaning relatively few healthy cells are affected.

For example, since the energy needed to trigger creation of a nanobubble in a cancer cell is insufficient to cause the reaction in healthy cells, the risk of damage to healthy cells by the use of such treatment is minimal. The potential for side-effects and collateral damage from the toxic trail left in the body by drugs administered by conventional means is, therefore, markedly reduced.

With cancer survivorship rates increasing, many more people are living with treatment side-effects. However, with nanotechnology, and discoveries such as those being made by researchers at Rice University and Northwestern University, the future picture could be people not only surviving cancer but continuing to thrive, free of life-depleting side-effects.

While the research described here has been remarkably successful, there are areas where caution is advisable. In particular, the process of identifying the cancer cells is time-consuming and expensive, and care must be taken to minimise the introduction of nanoparticles into cancer cells until the risks of killing or damaging those cells has been fully assessed.

In addition, more research is needed on human cancer cells as treatment efficacy is likely to vary individually and across cancers.
The early diagnosis of cancer, the development of more specific and effective treatments for those cancers and the identification of ways in which the debilitating side-effects of treatments can be alleviated continue to be the focus of worldwide scientific and medical research.

While cancer patients and their families continue to hope for an elusive cure, the medical applications of nanotechnology have introduced new concepts which promise real progress. If scientists within this field continue to be funded, there is the potential for nanotechnology to have inestimable benefits for people with cancer.