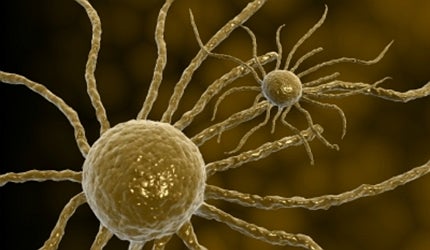 We are now one step closer to delaying the rate at which drugs are released into the human body in order to fight cancers and other life-threatening illnesses.

"Scientists in the US have built meshes made of superhydrophobic materials with biocompatible polymers which release chemotherapy agents over a prolonged period of time."

Scientists in the US have built meshes made of superhydrophobic materials with biocompatible polymers which release chemotherapy agents over a prolonged period of time, resulting in significant tumour cytotoxicity.

When spun, air is trapped in these meshes and used as a degradable component to control drug release during a two to three month period.

In vitro tests have been completed and now researchers are working with small animals to demonstrate that superhydrophobic materials have mechanical properties appropriate for surgical implantation, and also document the rate of drug release via ultrasound.

Yolonda Colson, surgical oncologist and director of the Women’s Lung Cancer Program at Dana-Farber/Brigham and Women’s Cancer Center, is working with Boston University professor of biomedical engineering and chemistry Mark Grinstaff on this study.

Here, she explains how their research could facilitate further exploration of this new type of drug delivery in cancer and non-cancer applications.

Sarah Blackman: How did the idea of building a 3D mesh to control drug release first come about?

Yolonda Colson: It’s interesting because most of our collaborations and ideas have come from needs that we see. I might see a person who is at a particularly high risk for recurrence because, for whatever reason, I can’t remove part of the tumour.

So, there are reasons for us to think about other ways in which we can get better local control, without having to give them all the side effects of some systemic drug release which we know that it doesn’t deliver very well. We then sit down and say, "here are my constraints, and I need to deliver this drug in this location."

One of the challenges that we have faced in the last couple of years is the fact that tumour cells are really sensitive when they are dividing and if the drug is all gone in three to ten days, I know that some of the cells will escape. So the idea was to keep a drug releasing over several months so that if things started to proliferate, we would have drugs in the system to kill the cells.

SB: How did you come across air as a barrier to control drug release over a long period of time?

YC: We started to look at better ways to make drug delivery films more flexible and not as rigid and so that’s where Mark Grinstaff got the idea to spin polymers into meshes. These are easier for us, as surgeons, to implant.

They are also easier for us to handle and get better coverage of the areas where tumour has been removed. Then, what we realised was that, particularly with a mixture of polymers, these meshes also had different drug release profiles. That’s where Dr. Grinstaff started to figure out that the mechanism for delayed release involved entrapped air within the meshes and that release could be delayed by increasing the stability of entrapped air within the mesh.

SB: What are the main benefits of controlled drug release over taking drugs repeatedly?

YC: If you look at the delivery of drugs that we give repeatedly, patients tend to get a high level and then it decreases.

"The idea in the future would be to be able to keep the drug where we want it and then release it when we want."

This is one of the nice things about the paper – it looks at SN38 and we know this doesn’t last very long because it’s broken down so quickly. But, if you had a way that you could release the drug continually, you don’t get this up and down pattern and you don’t have those windows where you’re subtherapeutic or supertherapeutic.

Depending on how we load it and how we create our doping to decide how fast we want it to release, we can actually titrate out where we think we have a therapeutic level for a long time. This is good for chemotherapy because we don’t want cells to proliferate in the time when we’re subtherapeutic.

SB: How did you test your superhydrophobic mechanism?

YC: We did the in vitro studies for this paper, but right now we are testing it on animals. We are looking at ways we can prevent recurrence and whether it can prevent tumours from growing.

What’s nice about this is that we can use ultrasound as a non-invasive method to track the location of the mesh and document drug release. We don’t have to go in, take it out and see how much of the drug has gone.

SB: What challenges did you face when you tested the mesh?

YC: Some of the challenges relate to learning how to use ultrasound and other technologies on small animals. Also, I don’t know if it was a challenge, but it was interesting to see how the drug partitions differently depending on how it’s manufactured.

SB: Are there any dangers that something could go wrong with this mechanism to make drugs release into the system too quickly?

YC: I think that’s why we are looking at exactly how to construct it because we want to make sure that this doesn’t happen and I think by doping it we give ourselves a bit more safety, because we know that it can only release so fast.

We also understand the process of wetting because if you get the mesh wetted, you can make it release faster. So, I think that having the ultrasound is a way to see how fast it’s releasing the drug is a nice safety mechanism so we know if the mesh is releasing the drug too fast.

SB: What kind of future do you see for controlled drug release?

"One of the challenges that we have faced in the last couple of years is the fact that tumour cells are really sensitive when they are dividing."

YC: People have talked a lot about the different polymers, PH changes and temperature changes and I think that air is another one of those mechanisms to control release.

The idea in the future would be to be able to keep the drug where we want it and then release it when we want. Right now, we can’t say we want the drug to be released tomorrow or in two weeks.

The reason we have been so interested in controlled release is because in surgery, I don’t want a whole bunch of chemotherapy to get released the next day.

I want patients to heal their wound and they need to have ten to 14 days for the healing process to work, particularly in ostomies for colon cancer or lung surgery. I think we are going to end up with a lot of controlled releases which you can turn on and off. We haven’t figured out a way to turn it off, but that would be nice.