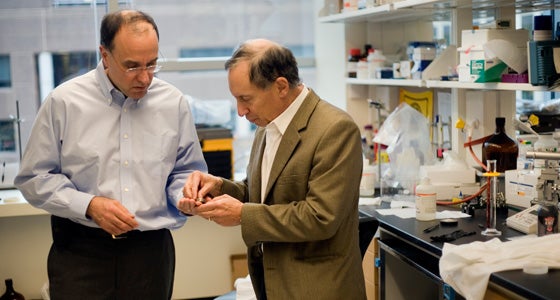 The world’s first clinical trial on a microchip implanted in the body to control the release of drugs has been carried out by US scientists.

The results, published in Science Translational Medicine, showed that the wireless device successfully administered daily doses of an osteoporosis drug normally given by injection.

MIT professor Robert Langer said the findings represent the first successful test of such a device and could help usher in a new era of telemedicine – delivering health care over a distance.

"You could literally have a pharmacy on a chip. You can do remote control delivery, you can do pulsatile drug delivery, and you can deliver multiple drugs," Langer added.

In the study, funded and overseen by MicroCHIPS, scientists used the implants to deliver osteoporosis drug teriparatide, manufactured by Eli Lilly, to seven women aged 65 to 70 over a period of four months.

Researchers found that the device delivered dosages just as effectively as injections, and there were no adverse side effects. Patients also stated that the implant did not impact quality of life.

The programmable chips could dramatically change treatment not only for osteoporosis, but for other diseases such as cancer and multiple sclerosis.

CEO and president of MicroCHIPS Robert Farra said, "Patients with chronic diseases, regular pain-management needs or other conditions that require frequent or daily injections could benefit from this technology."

Professor of engineering at MIT Michael Cima commented, "Compliance is very important in a lot of drug regimens, and it can be very difficult to get patients to accept a drug regimen where they have to give themselves injections."

"This avoids the compliance issue completely, and points to a future where you have fully automated drug regimens," he added.

MicroCHIPS plans to seek approval for further clinical trials once an implant that can carry a larger number of doses is ready.

The company has also developed a sensor that can monitor glucose levels, which could eventually lead to the development of chips that can adapt drug treatments in response to the patient’s condition.