On February 26, 2019, seven executives from multinational pharmaceutical companies testified in front of the US Senate Finance Committee on drug prices. As a potential proposal to alleviate the economic burden on patients, several executives stated that their companies would lower list prices if rebates given to PBMs (pharmacy benefit managers) and insurers were shared with patients. Per Pfizer’s CEO Albert Bourla “It is our very clear intention that we will not keep a single dollar from these rebates. We will try to move every single penny to the patients.”

Passing rebates to patients is likely to have considerable impact on patient behavior. Out-of-pocket (OOP) cost has been identified by recent studies (Determinants of adherence to diabetes medications, , Social Determinants of Health, Cost-related Nonadherence, and Cost-reducing Behaviors Among Adults With Diabetes, and Improving diabetes medication adherence) as a determinant of adherence to diabetes medications. Sharing rebates at point of sale (POS) can lower patients’ OOP expense and as a result, improve patient adherence. In turn, higher patient adherence has been found to reduce hospitalization and overall healthcare cost for patients with diabetes.

We constructed an economic model to estimate the budget impact of passing through a share of negotiated manufacturer rebates to patients at POS (Exhibit 1). This model has already been applied on the Medicare population with type 2 diabetes in a 2018 study and projected billions of medical savings over 10 years. Recently, we applied the model to a commercially insured population with high-deductible health plans (HDHP) and preferred provider organization (PPO) plans. The study population included adults with type 2 diabetes on brand medicines eligible for rebates. Three treatment regimens were modeled and then aggregated – brand oral antidiabetic only, brand insulin only, and beneficiaries on both types of treatments. Average negotiated price (“list price”) of brand diabetes medications was $474 with 47% of the list price paid to insurance plans as rebate. The average OOP cost per beneficiary was estimated to be $256. If the entire rebate were passed on to patients at POS, the OOP cost per patient would decrease by $120 to $136 per fill (Exhibit 2). 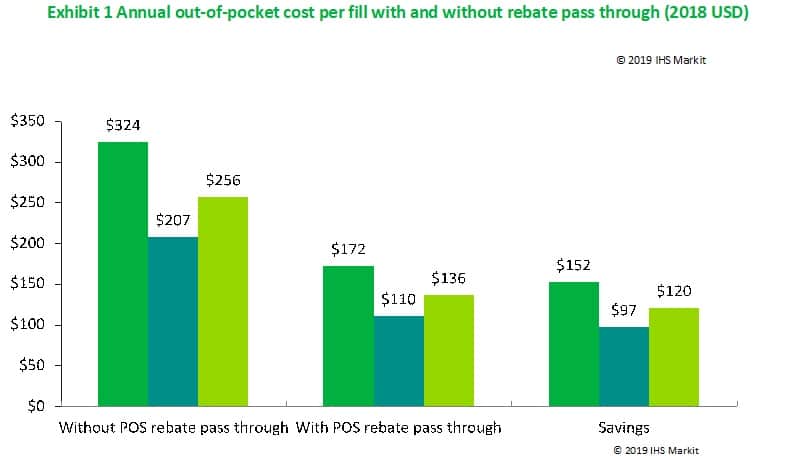 Total annual direct cost per beneficiary, covering both medical services and prescription drugs, averaged $17,114 before rebate sharing. We estimated that passing through 100% of the rebate at POS would reduce the annual direct cost of diabetes by $884 per beneficiary with $791 of the savings coming from out-of-pocket costs. (Exhibit 3) With the improved adherence, health plans would spend more on diabetes medicines (shown as negative savings in the exhibit) but those costs would be more than offset by the reduction in overall medical costs from better disease management, resulting in a net saving of $93 for the plans. 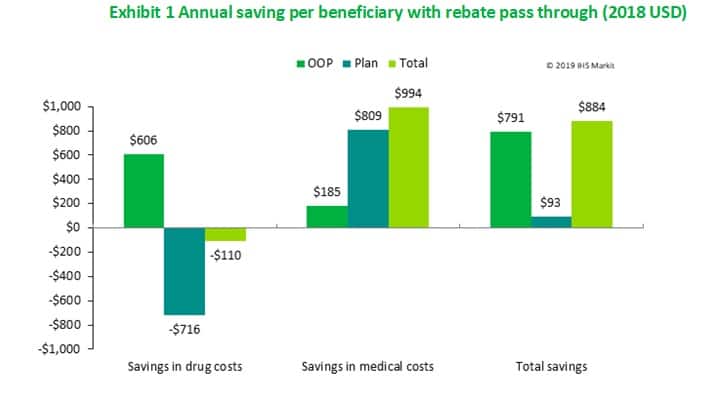 To put the results in context, we estimated the total savings in the direct medical cost of diabetes in the commercially insured population over ten years. (Exhibit 4) Our projections indicated that passing through rebate at POS is expected to reduce aggregate medical costs by $41.1 billion (5.1%) over the next ten years. Both patients and insurance plans were expected to have lower medical spending, with plans saving $4.4 billion and beneficaries saving $37.1 billion. (numbers don’t add up to $41.1 billion due to rounding). Further analysis indicated that sharing just half of the rebates would still result in savings for both individual beneficiaries and health plans. These findings suggest that passing rebates directly to patients at POS can lead to positive changes in patient behavior which in turn can generate substantial savings for both individuals with diabetes and health plans.

A more detailed description of modeling methodology is available. The research described in this blog was funded by the Pharmaceutical Research and Manufacturers of America (Phrma ).

Market Access, Pricing and Reimbursement of Oncology Medicines in the 5EU

Pharmaceutical Research and Manufacturers of America

US midterm election results have multiple implications for the pharma industry

GlobalData at ISPOR Europe in Vienna – come see our posters!