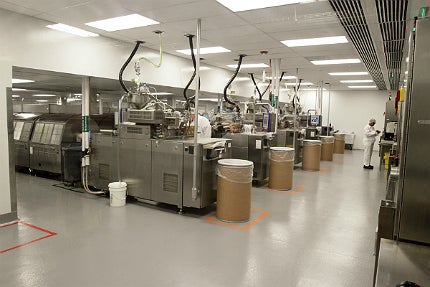 The facility currently provides employment to 245 people and expects to create some additional jobs by the end of 2013.

Details of the Pharmavite nutraceuticals facility

“It manufactures vitamins, minerals and other dietary supplements of a high quality.”

The new manufacturing facility has a total floor space of 330,000ft². It produces vitamins, mineral and supplements (VMS). It is situated in a three-level building at Northeast Opelika Industrial Park.

The facility serves as the east coast flagship production centre for Pharmavite. The products manufactured at the facility go through rigorous testing and third-party verification programmes.

The vitamins manufacturing facility has state-of-the-art machinery which translates products from raw materials to packaged goods.

It is installed with high bay receiving and storage equipment. It has bulk storage tanks which are used for blending, tableting, coating and soft gel manufacturing. It also includes the quality assurance and quality control laboratories.

Products manufactured at the plant in Alabama

Construction of the vitamin and supplement facility

Construction broke ground for the new manufacturing building in October 2011. The foundation works for the building began February 2012. The plant became operational in January 2013, and was officially inaugurated and attained full capacity production in June 2013.

The general construction contract for the manufacturing facility was awarded to Whiting-Turner, a company based in Tampa. The Industrial Development International (IDI) based in Atlanta was awarded with a contract to act as the construction manager and oversee the development, design and commissioning of the project in August 2012. It acted as liaison between the contractor and Pharmavite.

Sustainability of the nutraceuticals plant

The nutraceuticals manufacturing facility was constructed with environmental-friendly construction methods. It was constructed to obtain Leadership in Energy and Environmental Design (LEED) silver certification from the US Green Building Council.

The total investment for the construction of the facility was about $89.6m. Pharmavite initially financed the project with $73m funding in 2012. It invested another $16.6m in 2013.

Pharmavite is based at Northridge in California, US. It operates as a subsidiary of Otsuka Pharmaceutical Company. Pharmavite’s core business includes production of high-quality vitamins, minerals, dietary supplements and all natural-foods.

“Pharmavite is based at Northridge in California, US. It operates as a subsidiary of Otsuka Pharmaceutical Company.”

Pharmavite established the new nutraceuticals manufacturing facility at Northeast Opelika Industrial Park in Alabama in order to tap the increasing consumer demand for health and wellness products across the US and internationally.

According to the Nutrition Business Journal, about 52% of the adult people in the US used vitamins and supplements occasionally in 1999, while consumption increased to 66% in 2010.

Amway, a direct-selling company based in the US, started the construction of a new Nutrilite® production facility in May 2013.

The Jill and John Freidenrich Center for Translational Research was officially opened in October 2012.

When Freezers Fail: How to Protect Frozen Patient Samples in the Event of a Freezer Malfunction

Five Critical Questions to As When Implementing a Laboratory Monitoring Solution

Clinical Packaging Companies in contract Marketing for the Pharmaceutical Industry

API Chemical Companies in Contract Marketing for the Pharmaceutical Industry

Commercial Packaging Companies in Contract Marketing for the Pharmaceutical Industry