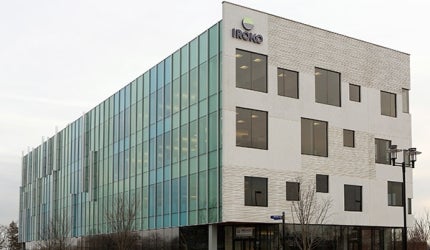 Iroko Pharmaceuticals inaugurated its new global corporate headquarters in December 2012 at the Navy Yard Corporate Centre in Philadelphia, USA. The building was developed by Liberty Property Trust and Synterra Partners. Liberty invested $15.4m in the project.

The Navy Yard Corporate Centre is a business campus spread over in 1,200 acres. More than 120 companies have established their offices and more than 10,000 people have been employed in the research, manufacturing and development sectors. It has been developed and operated by Philadelphia Industrial Development Corporation (PIDC), a real estate group.

The new headquarters of Iroko Pharmaceuticals

The new global headquarters is situated in a four-storey building with a floor space of 56,412ft². It will focus on bringing therapeutic improvements through lower dose submicron non-steroidal anti-inflammatory drugs (NSAIDs). The company has employed over 60 people in the new building, and plans to accommodate up to 180 employees in the next two years.

The company’s product portfolio includes pain relievers such as Indocid (indomethacin) capsules, which are used for rheumatoid arthritis, osteoarthritis, acute bursitis and tendonitis of the shoulder, and Aldomet (methyldopa) tablets, used for the treatment of various forms of hypertension.

"The final construction was completed and the facility was opened for commercial activity in December 2012."

These drugs will be produced using SoluMatrix technology developed by iCeutica. The technology reduces the drug particles to finer particles that are at least 10 times smaller than standard NSAID drug particles. It will also improve drug-dissolution properties without altering the chemical structure of the drug.

Iroko broke ground for the construction on the new headquarters building in September 2011. The topping off ceremony was held in March 2012. The final construction was completed and the facility was opened for commercial activity in December 2012.

The building was designed to obtain LEED-CS Gold certification. It was built in compliance with LEED (Leadership in Energy and Environmental Design) categories as well as sustainable design principles.

The building was mostly built with the locally available materials. It features an energy-efficient building-wide area network (BWAN) system, which can track and manage energy use through a phone, computer, or PDA. The BWAN system was developed by Liberty.

Germany-based privately held pharmaceutical company Boehringer Ingelheim is involved in drug discovery, development and manufacturing. The company has invested more than $350m in 2011 to boost its operations in the US.

Iroko Pharmaceuticals is a US-based pharmaceuticals company engaged in the development and marketing of innovative therapeutic products. It maximises the potential of existing marketed products by developing new formulations according to the patient requirement, and introducing new product-life-cycle management activities. Its products are marketed across 48 countries in the world. The company has many products developed on NSAID submicron technology. The company established the first offices at Navy Yard in 2007.

More than 100 million prescriptions in a year in the US are written for NSAIDs. The currently marketed NSAIDs contain higher doses, which result in developing the risk of cardiovascular events, gastrointestinal bleeds, and ulcers in the patients who regularly use them for a longer time. Iroko produces and develops lower dose submicron NSAIDs from the existing commercial drugs that will provide helpful pain relief at a very low dose.