Expand
An aerial photograph of the Holly Springs construction site.
An electron micrograph of the flu virus.
Flu vaccines have previously been produced using eggs.
The additional capacity at the Novartis plant will cater for a flu pandemic.
The plant became operational in 2012.
In 2009 the HHS BARDA awarded Novartis an eight-year contract to support the design, construction, validation and licensing of the Holly Springs facility. 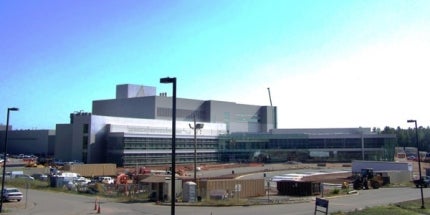 In July 2006 Novartis announced that it would build a new vaccine manufacturing facility in Holly Springs, North Carolina, US. The new 430,000ft² plant was inaugurated on 24 November 2009, and production commenced in 2012. The plant is employs approximately 500 people to produce flu vaccines using cell culture-based manufacturing technologies.

The facility was constructed on a 167-acre site in Holly Springs Business Park off the NC 55 bypass. A central corridor connects the five buildings of the plant, including a production house, warehouse, maintenance and office building. Construction started in the first quarter of 2007 with the first design phase completed in 2008. The plant became operational in 2012.

The initial investment was estimated at $267m but eventually reached $1bn with subsequent phases of expansion.

In January 2009, the US Department of Health and Human Services, Biomedical Advanced Research and Development Authority (HHS BARDA) awarded a contract to Novartis to support the design, construction, validation and licensing of the Holly Springs facility. The eight-year contract was valued at $486m.

In February 2013, the plant received Facility of the Year Award (FOYA) award from the International Society for Pharmaceutical Engineering (ISPE).

"Several states competed for the manufacturing facility, with its promise of hundreds of jobs and millions in tax revenue."

Several states competed for the manufacturing facility. Novartis’ selection of the town followed an intensive two-year effort by Holly Springs with assistance from state and county agencies.

Attracting the manufacturing facility required an incentives package that included $8.3m from Holly Springs. The Town Council approved the purchase of the 167-acre site for the facility in the business park for $7.3m from G&G Properties and transferred ownership to Novartis.

The council then approved an additional $1m spending for site clearance. Holly Springs also received an $800,000 grant from the Golden LEAF Foundation to help fund infrastructure improvements in the business park.

In total, Novartis Vaccines and Diagnostics, a subsidiary of Novartis AG of Basel, Switzerland, received cash grants, land, tax credits and other incentives worth more than $41m from state and local governments. The town property taxes that Novartis paid on the first phase of construction are expected to enable Holly Springs to recoup its investment within ten years.

Securing the project had been the culmination of five years of economic development groundwork by the town council to make Holly Springs attractive to the growing biotech industry.

Novartis had evaluated 15 sites before choosing Holly Springs. The city was chosen for the availability of infrastructure, a well-trained and educated workforce and quality of life, according to Dr Joerg Reinhardt, CEO of Novartis Vaccines & Diagnostics division. The town hired Jennings Consulting to help market the 400 acre business park for technology manufacturing companies, and this helped in the attraction of Novartis.

Extension of infrastructure was a key part of the process. In 1996 Holly Springs began studying how best to pipe water from Harnett County to supplement the flow from Raleigh.

Construction began in 2000 on a pipeline capable of carrying 10 million gallons a day.

The line was increased to serve large-scale manufacturing operations such as Novartis while accommodating residential growth. With improved capacity, the town is arranging to pipe more water through the line.

The facility can annually produce up to 50 million doses of seasonal trivalent flu vaccines, which are used in the US.

In the event of an influenza pandemic, the facility has planned to have a capacity of up to 150 million monovalent doses annually, within six months of a pandemic declaration. Novartis is also making investments in its site in Marburg, Germany, to expand capacity for flu cell culture vaccines production in Europe.

The facility also develops MF59, the Novartis proprietary adjuvant. Adjuvant-based studies are underway in the US.

The clinical trials conducted on the MF59 adjuvanted cell culture-based vaccine demonstrated that the levels of protective antibody can be raised against A(H1N1) infection, two weeks after a single dose of adjuvanted vaccine has been administered. Results also showed that MF59 offers cross-protection against similar strains of a H5N1 virus. The adjuvant was also found to strengthen the body’s immune system to provide more protection from harmful pathogens and viruses. It is manufactured using shark liver.