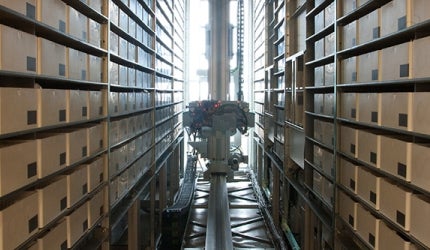 The University of California San Francisco (UCSF) has built an automated hospital pharmacy at its new medical centre at Mission Bay, San Francisco. The system is capable of dispensing medication automatically. It utilises robotic technology to prepare and track medications.

The under-the-radar pharmacy system was introduced in March 2011 and to-date nearly 350,000 doses of oral and injectable medications were prepared without error.

UCSF believes the system will achieve the goal of improving patient safety and increasing the medical centre’s efficiency. It plans to build robotic pharmacies at all of its branches.

The Mission Bay pharmacy currently dispenses medications to UCSF’s hospitals at Parnassus Heights and Mount Zion in San Francisco. It will also dispense medications to a new hospital that UCSF plans to open at Mission Bay in 2014.

The Mission Bay facility is the second such state-of-art pharmacy in the world. The first is located at Cedars-Sinai medical centre in Los Angeles.

Details and benefits of the robotic pharmacy

“The University of California San Francisco has built an automated hospital pharmacy at its new medical centre at Mission Bay, San Francisco.”

UCSF initially planned to upgrade and renovate its existing pharmacy with an investment of $24m. It later decided to develop a new robotic pharmacy for $15m, not including the full automation cost.

The automated hospital pharmacy relies on a hub of automated robots to distribute medicine to patients. It enables UCSF to research various ways of dispensing medicine and relieves nurses and pharmacists from regular manual tasks. UCSF is able to train clinical pharmacists to focus on patients rather than drugs.

The pharmacists and nurses also get more time to discuss suitable drugs for a patient with physicians. This enables closer care and monitoring of patients.

The robotic pharmacy uses the pill-pick system to separate batches of pills into individual doses. The collected pills are bagged and stored. Pill-pick is a modular system with connected devices that automatically produce unit dose medicaments. The automated warehouse, where the dose medicaments are stored, is always ready to provide personalised therapy to patients.

“The under-the-radar pharmacy system was introduced in March 2011 and to-date nearly 350,000 doses of oral and injectable medications were prepared without error.”

The physicians of UCSF send orders to the system electronically. The robotic system then picks the packages and dispenses the individual doses of pills. The system dispenses more than 10,000 doses per day.

The packed doses of the pills required by a patient are tied together on a plastic ring and barcoded for a 12-hour period. The nurses confirm the right medication for the patients through the bar code readers. The system also keeps record of the medication stock available in the pharmacy.

Three RIVA (Robotic IV Automation) robots fill doses of liquid medication into IV syringes and bags. The robots work in a protected germ-free environment where there is a less chance of the medication getting contaminated. The pharmacists also don’t handle the drugs, so there is less risk of the medication being mixed.

Human pharmacists were appointed to check the work of robots. Once the phase-in is fully operational, the human intervention will be eliminated and doctors will start prescribing medicines directly through computers.

The robotic pharmacy has been awarded with LEED CI Gold certification for its sustainable building practices.

When Freezers Fail: How to Protect Frozen Patient Samples in the Event of a Freezer Malfunction

Five Critical Questions to As When Implementing a Laboratory Monitoring Solution

Clinical Packaging Companies in contract Marketing for the Pharmaceutical Industry

API Chemical Companies in Contract Marketing for the Pharmaceutical Industry

Commercial Packaging Companies in Contract Marketing for the Pharmaceutical Industry

Roche to supply Actemra IV courses to Canada for Covid-19