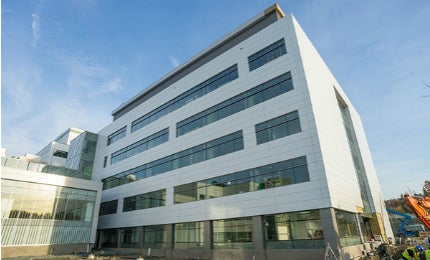 Construction of the Williamson Translational Research Building (WTRB) at the Geisel School of Medicine was initiated in June 2013 and completed in August 2015.

WTRB is located within the Dartmouth-Hitchcock Medical Centre (DHMC) campus in the city of Lebanon, New Hampshire (NH). It is named after neurologists Peter and Susan Williamson.

The new building is equipped with research facilities to support the collaboration of biomedical scientists and clinicians to accelerate advancement of discoveries from research labs into patient care.

“The new facility will be equipped with research space and facilities for the collaboration of biomedical scientists and clinicians to accelerate advancement of discoveries from research labs into patient care.”

The new translational research facility is located in a six-storey building with a total floor space of 166,000ft². It includes 39 wet laboratories, a pathology lab, a vivarium, a 200-seat auditorium, huddle rooms, and office spaces.

The building is clad with metal panels and glass curtain walls. It also features a large atrium and bridges connecting the WTRB to the main hall of DHMC, as well as to the surrounding Borwell and Rubin buildings.

Construction for a glass corridor; auditoria E, F, and G; and a hall connecting the WTRB with the main Medical Centre began in April 2014.

Eisai created H3 Biomedicine with the basic objective of developing drugs in oncology.

The design of the WTRB at Dartmouth Hitchcock Medical Centre (DHMC) was provided by HDR. Casali Group was contracted to provide project management services.

ORW was contracted to provide landscaping design services, which included the integration of native plant materials and a landscaped rain garden.

Simpson Gumpertz & Heger (SGH) was contracted for engineering services for the structures and building enclosures, while RG Gosselin was contracted to supply concrete and provide excavation services.

Financing for the construction of the WTRB

A total $116.5m investment was made for construction of the WTRB, which was funded through a $20m donation by Peter and Susan Williamson to the Transforming Medicine Campaign in 2007.

DHMC contributed $20m for the project, while an additional $18m grant was awarded by the Geisel School of Medicine under the National Institutes of Health’s Clinical and Translational Science Award (CTSA) programme in October 2013.