In Association with Butterworth Laboratories

Multiple Headspace Extraction Gas Chromatography (MHE GC) is an analytical technique that is used to calibrate a headspace GC system where all other ‘normal’ approaches have failed. The technique has the ability to provide fully quantitative analytical results that are not readily possible by other means of exhaustive extraction. Download to receive a full guide to MHE GC. 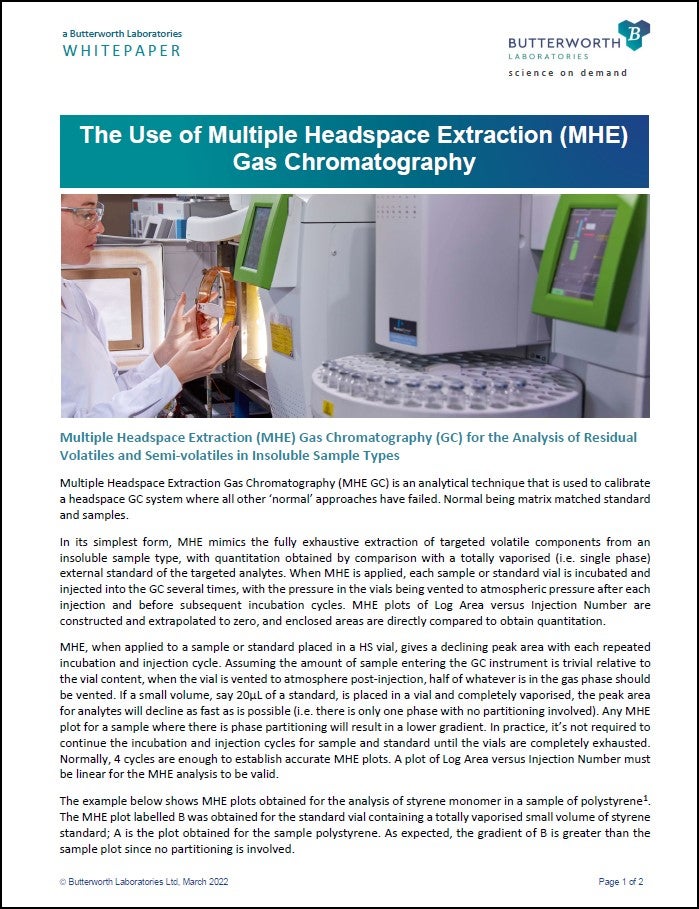 Prior to the implementation of the revised standard, no obvious consideration was given to patient age when setting the appropriate limits for ethylene oxide residues in medical devices.  Arbitrary limits given as milligrams of exposure to residues per device were simply prescribed based on the physical contact time allowed for each category of device. It was also not apparent without the scrutiny of the many appendices how these figures had been derived. The new standard differentiates limits to be applied to babies and infants based on body mass, which we consider to be an improvement to the previous “one size fits all” recomenndations.

As might be expected, the limits for babies and infants calculated, taking account of the new standard, are significantly lower and may be below the quantitation limit of some current analytical methods developed and validated by manufacturers. For example, for a device with a maximum contact time of 24 hours, the “old” limits for ethylene oxide (EO) and ethylene chlorohydrin (ECH) for exposure, given a body mass of 70kg and a single device was involved were 21 and 60mg respectively. The new limits for a baby of mass 4kg (single device) would be 1.2 and 2.56mg respectively.

While the present article outlines how the limits for ethylene oxide sterilization residues based on body mass are to be calculated for babies and infants, it will also discuss how the analytical results determined for residues generated by even the most precise GC analytical methodology, are only ever as good as the sampling, sample preservation and sample preparation procedures employed.  This is especially true when analytes of high volatility and reactivity such as ethylene oxide (EO) are concerned. When dealing with such a highly toxic agent, Butterworth Laboratories has always recommended a worst-case approach regarding this standard.

The present article is applicable to solid medical devices but not fabrics, drapes, contact lenses or some other particular devices such as dialysis blood flow components.

EO is known to have a number of biological impacts including irritation, organ damage, mutagenicity and carcinogenicity as well as negative reproductive effects. The main drawback of using EO as a sterilization agent is that it can leave toxic residues on the articles being processed. It is therefore essential that EO sterilized articles are subjected to sufficient aeration to remove such residues prior to final packaging by manufacturers.

Further to EO residue itself, toxic reaction and degradation products such as ethylene chlorohydrin (ECH) and ethylene glycol (EG) can result from the use of EO as a sterilization agent.  ECH, is a residue that can form when EO comes into contact with free chloride ions and EG when EO reacts with water.

The use of EO is addressed by ISO 11135-1 which specifies requirements for the development, validation and routine control of EO sterilization processes for medical devices. ISO 10993-7 is the complimentary standard detailing allowable limits for residual EO, ECH and EG. It also outlines procedures for the measurement of EO and ECH in order to determine compliance so that devices may be safely released for use.

(A) Limited Exposure:  devices whose cumulative sum of single, multiple or repeated contact is up to 24 hours.

(B) Prolonged Exposure:  devices whose cumulative sum of single, multiple or repeated contact is likely to exceed 24 hours but not 30 days.

The ISO standard specifies the maximum levels of release of EO and ECH residues over specific time periods for each category of device.

The standard also defines two types of extraction of residues from samples prior to analysis: Simulated-Use and Exhaustive. Care needs to be taken in assessing which option should be chosen for a specific medical device.  Simulated-use is based on water extraction to evaluate residue levels actually available to a patient or user of a device during its routine use and is mainly applicable to categories (A) and (B).  Exhaustive extraction is defined slightly differently in that the definition states: extraction until the amount of EO or ECH in a subsequent extraction is less than 10% of that detected in the first extraction, or until there is no analytically significant increase in the cumulative residue levels detected.  It typically can be applied to category (C) devices. The ISO reference procedure is Simulated-Use extraction.

Calculation of Limits in General:

The following general discussion of limits for residuals (EO and ECH) is only found from the scrutiny of the appendices of the standard. A number of definitions are required at this point:-

Final limits are obtained in terms of total mg of exposure per day to residues for each category of device. The limit is defined as the Tolerable Exposure (TE).

The final calculation of specific limits is then obtained as follows;

Using this calculation the actual limits can be calculated if all variables are known. Figures given in the main body text are given assuming a body mass of 70kg for the adult population, a CEF of 0.2 and a PEF of 1.  While the appendices of the standard gives the detail for calculation of limits for EG, the standard states that it is not usual to find significant residues of EG given that any residual EO is within limits. In any case, the calculated limits would be very high and it is unusual to investigate EG residues present (if any).

The following Generic limits are given as examples in the standard main body text.

The following has been lifted “as is” from the standard.

If the device is intended for use in babies and infants, the limits shall take account of body mass as follows: 0.02 mg/kg/day for EO, 0.029 mg/kg/day for ECH.

If the device is intended for use in babies and infants, the limits shall take account of body mass as follows: 0.3 mg/kg/day for EO, 0.27 mg/kg/day for ECH.

The average daily dose of EO and ECH should not exceed 4 and 9 mg/day respectively.

If the device is intended for use in babies and infants, the limits shall take account of body mass as follows: 0.3 mg/kg/day for EO, 0.64 mg/kg/day for ECH.

Frank D. Judge, Consultant Chemist Chromatography at Butterworth Laboratories comments: “I have to confess that I was somewhat disappointed when I realised that the new standard, supposedly to introduce limits for children, simply gives the same TI (mg/kg/day) values as have been used for calculation of adult limits. The only difference being that the child’s body weight rather than an assumed 70kg should be used in calculation. It could simply have stated that where children are concerned, actual body mass should be used. Unless I have missed a figure somewhere in the depths of the standard appendices, I was surprised that the new standard, including limits for children, does not give the assumed body mass to be used for the calculation of generic limits for children. I would like to think that I have simply missed this and it is in fact stated somewhere in the new standard.”

The majority of samples received for analysis at Butterworth Laboratories are category (A) Limited Exposure types such as dressings, clamps, speculums and other plastic articles. This article will focus further on the sampling and analysis of these items and the use of the reference Simulated-Use extraction procedure.

While the analytical procedure is of course of major importance, the most accurate and carefully designed methodology is superfluous if representative articles are not selected and supplied for testing intact. Once received by the testing facility, maintenance of sample integrity is also paramount.

Butterworth Laboratories make the following recommendations to their clients:

The process of simulated-use extraction of limited exposure devices is carried out by adding the sample articles to glass bottles which are then filled with a recorded volume of high purity water and capped.  Extraction is then carried out by incubation of the bottles at 37°C for articles that directly contact the body when in use such as dressings.  25°C is used for articles which do not directly contact the body such as syringes. While it is only required to extract samples for the amount of time they will be in contact with the body in use, with a minimum prescribed by the ISO standard of one hour, again Butterworth Laboratories  recommend a worst-case approach to extract samples for the full 24 hours maximum usage time allowed for limited exposure type devices.

For plastic items such as long speculums which may not be easily accommodated in normal laboratory bottle types, it may be required to break the article into smaller pieces for extraction.  It is recommended that example samples additional to those for actual testing are supplied, so that this operation can be practiced.  This is recommended so that when the process is carried out on actual samples, that a minimum amount of time is taken between removing the samples from frozen pre-analysis storage conditions until the samples are sealed in bottles ready for extraction. It is also vital when filling and capping the extraction bottles that minimum air space is left that EO or ECH vapours could partition into during the incubation period and which would lead to lower recovery of analytes.

In order to determine whether EO is consumed by reaction with the sample material itself or with water to form ethylene glycol during the incubation period, additional unsterilized samples of each type should be provided so that the extra sample extraction bottles used for these can be artificially spiked with EO and then analysed along with the routine samples in order to qualify recovery.

The standard states that the simulated-use extraction procedure is the reference method for extracting EO residues from samples. In practice, for limited exposure devices, the efficiency of this process is not evaluated at the time of use as long as the process and conditions described in the standard are followed. This means that the actual analysis is simply EO and ECH in water extracts and therefore a validation based on each device type is not required. One exception to this general rule actually encountered by the author, was where a permanent contact bone graft sponge actually absorbed and did not liberate EO during simulate-use extraction. The analytical procedure used at Butterworth Laboratories determines both EO and ECH using a single Headspace Gas Chromatography method.

Multiple Headspace Extraction Gas Chromatography (MHE GC) is an analytical technique that is used to calibrate a headspace GC system where all other ‘normal’ approaches have failed. The technique has the ability to provide fully quantitative analytical results that are not readily possible by other means of exhaustive extraction. Download to receive a full guide to MHE GC.