In Association with Pfeiffer Vacuum

Quality standards continue to rise in the pharmaceutical industry, and there has never been greater focus on securing drug sterility. Essential to this is the manufacturer’s need for an effective primary packaging process they can rely on to protect their product.

Webinar: Why and how to replace Dye Ingress Test by deterministic CCIT methods

Patient safety and pharmaceutical product efficacy depends on container closure integrity, and container closure integrity testing (CCIT) is a crucial part of the manufacturing process. Right now, the pharmaceutical industry is undergoing a paradigm shift: away from traditional probabilistic methods and towards deterministic methods. Pfeiffer Vacuum dives deep into the world of CCIT, providing a comprehensive insight into its methods and introducing innovative helium testing, mass extraction and optical emission spectroscopy to the industry. 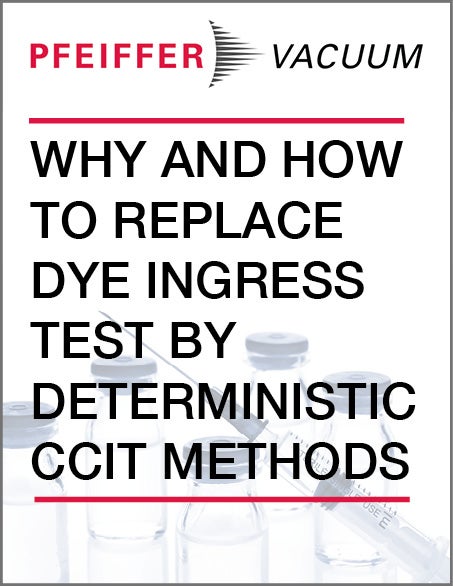 To validate this packaging, and ensure it performs well over time, pharmaceutical companies require a reliable and sensitive system for Container Closure Integrity Testing (CCIT). CCIT is essential for detecting leaks in the package that might otherwise encourage the harmful ingress of microbes, oxygen, and moisture into the drug.

Significant changes have evolved in the CCIT field over the years. While methods like the blue dye ingress test were once widely accepted, developments in regulatory guidelines have since demanded that more deterministic methods be used, and the introduction of maximum allowable leakage limits (MALL) for various types of packaging container have further supported the need for more sensitive, reproducible, and reliable methods.

Helium mass spectrometry has emerged as the new leak detection standard for non-porous packages such as vials, syringes, and cartridges. The method is favoured by manufacturers and regulators for its higher sensitivity, faster test times, and traceability, as well as the determinism it offers in contrast to the probabilistic traditional methods. Pharmaceutical companies typically choose this process during the validation and the qualification stages of a new packaging process, where MALL plays a key role.

The principle is simple, and can be set up in two different configurations:

A helium-filled container is placed inside a vacuum chamber. The test chamber is then evacuated and, if a leak is present, the flow of helium escaping from the container will be detected and measured by a mass spectrometry instrument. For quantitative analysis, the helium concentration inside the container during the test must be known. Depending on the helium filling process, this can be difficult. Furthermore, the test under vacuum must be performed immediately after the helium charging to avoid diffusion effect and lose of helium. Strictly speaking, a plausibility test should be performed after the vacuum test to confirm the presence of helium inside the container and to measure the exact concentration.

In the case of open containers, a vacuum is applied on one side of the sub-system (for example, test of the plunger in a syringe), and helium is charged on the other side. Consequently, a leak test can be performed before a permeation effect appears, and helium concentration can be perfectly controlled during the complete test sequence.

Due to the method’s popularity, many standard helium leak detection systems exist on the market. These include the ASM 340 line from Pfeiffer Vacuum, a prominent player in the CCIT market. The company’s portfolio comprises a broad range of vacuum-based leak detection technologies to suit the pharmaceutical industry’s many needs.

In Pfeiffer Vacuum’s collection of helium mass spectrometry solutions, one system stands out. The ASM 2000 is the company’s complete turnkey solution for customers requiring the most advanced and highly sensitive leak detection for sterile drug packaging validation. The ASM 2000 has been completely adapted to the needs of pharmaceutical companies and can be equipped with custom tooling and/or test chamber, depending on the containers to be tested.

At the end of the test sequence, results are clearly displayed on the system’s user-friendly interface. The CRF 21 Part 11-compliant software automatically generates PDF and calibration reports at the batch closure, providing the traceability that’s required in a GMP-regulated environment. In addition, Pfeiffer Vacuum can provide GMP support for installation qualification/operational qualification (IQ/OQ) by sharing the necessary documentation for all its test methods.

Outlining the impact that the ASM 2000 is having on the industry, Lukas Engel, Leak Detection Application Engineer at Pfeiffer Vacuum, says: “The industry has been using standard helium leak detectors for years. Mostly, companies have developed toolings and chambers themselves that have often only allowed a sensitivity level of around 1E-07 mbar*l/s.

“With the customized tooling that’s been developed for the ASM 2000, plus the controlled test sequence – including evacuating and charging of the sample – it is possible to easily test down to 1E-09 mbar*l/s, or even below depending on the container closure. Moreover, these features mean that the ASM 2000 also takes faster and more reliable measurements than those taken through manual charging of self-made toolings.”

Philippe Bunod, business development executive at Pfeiffer Vacuum, adds: “The ASM 2000 is a unique all-in-one solution for high sensitivity helium testing. The controlled evacuating and helium charging of samples and the automatic test sequence eliminates mistakes that may occur by using a standard leak detector equipped with self-made chambers. The result is a fully controlled, traceable, consistent, and high sensitivity measurement.”

Webinar: Why and how to replace Dye Ingress Test by deterministic CCIT methods

Patient safety and pharmaceutical product efficacy depends on container closure integrity, and container closure integrity testing (CCIT) is a crucial part of the manufacturing process. Right now, the pharmaceutical industry is undergoing a paradigm shift: away from traditional probabilistic methods and towards deterministic methods. Pfeiffer Vacuum dives deep into the world of CCIT, providing a comprehensive insight into its methods and introducing innovative helium testing, mass extraction and optical emission spectroscopy to the industry.