The current trend of increasing potency of drug substances is driving the need for better cleaning methods to reduce cross-contamination. 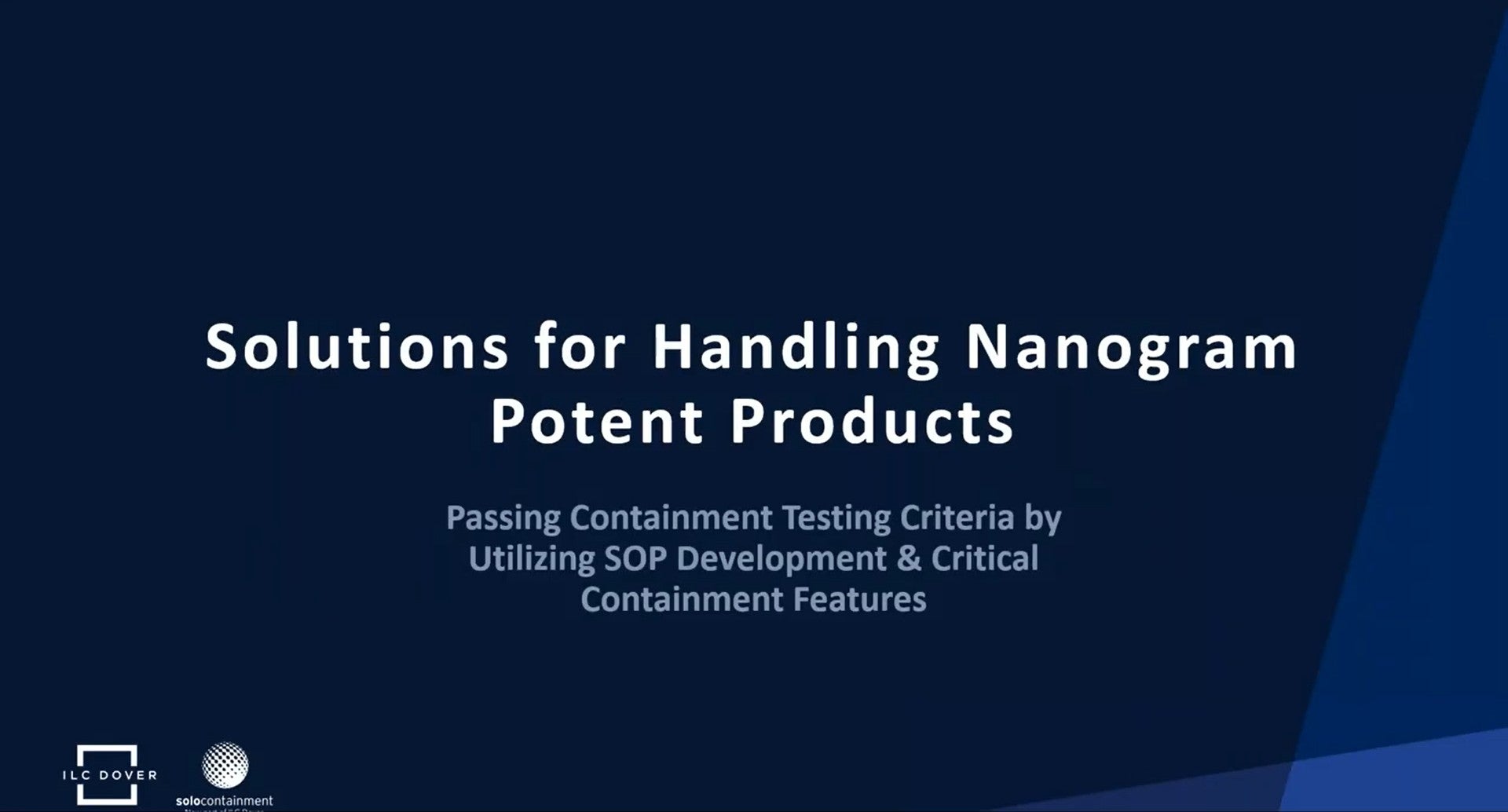 Level of detection (LoD) methods are improving so that cleaning limits can be reduced to further mitigate risks of cross-contamination due to retention on the process equipment and containment devices.

Cleaning protocols are becoming more complicated to achieve the cleaning limit. In the case of isolator technology, the isolator surfaces add to the overall cleaning requirements while often making the cleaning ergonomically challenging. This is where a single-use isolator will provide significant economic advantages, lower costs, and reduce the risks of cross-contamination over traditional hard wall isolators.

The pharmaceutical market has been adopting single-use or disposable solutions for over 20 years and the rate of installations continues to grow. The key issue has been containment performance and meeting the exposure limits of the HPAPI market. ILC Dover has been collecting data from dozens of installations using multiple industrial hygiene groups to demonstrate the ability of single-use containment. This technology was once thought to be only for short-term use while permanent containment solutions were put in place.

Now the single-use technology is used by most pharmaceutical companies as the primary engineering control for containment. Data for single-use isolators has shown containment of lower than 50.0 nanograms/m3 airborne concentration. Referencing one study of a wet granulation and tray drying process, the containment of each system and the transfer from the granulator to dryer was less than 6.0 nanograms/m3.

These studies compare favorably to downflow booth systems and negative pressure hard wall systems. As with all isolator systems, the transfer of products and tools in and out are the points with the most risk of exposure and selection of the transfer method is critical to a successful design.

Below in Chart 1 is data from SMEPAC tests conducted on different processes:

This example is for a static pressure isolator, but many companies have created containment policies that require a negative pressure system when dealing with HPAPI to further reduce risks. In this case, the ILC Dover isolator is adapted with the JetVent™ system from their Modular Process Control (MPC) line of equipment. The JetVent™ provides a steady negative pressure inside the single-use isolator while monitoring and adjusting for pressure fluctuations.
The fan and filter system can react even in a breach condition to maintain a negative pressure and safety for operators. Once the pressure control system realises an upset condition the fan automatically creates higher airflow and alerts the operator with an alarm.

So where is the economy and the cross-contamination reduction with the single-use isolator? It starts with an easy calculation of the isolator surface area. A typical dispensing isolator can be 60in wide x 30in deep x 40in high. The total surface area of the “box” is 10,800in². That entire surface must be cleaned and meet the validated cleaning limit or risk cross-contamination. This simple surface calculation does not consider some of the most critical areas for cleaning which include the gloves.

The “balloon” design (six-sided isolator) by ILC Dover shown in Picture 1 eliminates 100% of the surface area except where transfer points might be located. In any case, this is a dramatic reduction in cleaning time and risk. The transfer points are sealed and separated using CrimpLoc™ technology and the gas inside the isolator is expressed out through HEPA filters. The single-use isolator is ready for disposal.

In some cases, a five-sided single-use isolator is used with a stainless-steel working surface. A unique trim sealing surface locks the flexible isolator to the stainless-steel surface. For safe disposal of this style, a wet in place spray wand is integrated into the isolator. The isolator surfaces are wetted, and it is now safe for removal.

A study in Japan of this system included operator breathing zone (OBZ) monitoring of the operators doing the removal and swab testing for residue on the floor. That resulted in meeting the containment performance target from set-up, operation, and disposal. It also dramatically reduced cleaning time.

The clean-up after processing of many pharmaceutical molecules is not as easy as a water rinse or wash. Solvents and detergents are used regularly for cleaning which creates more problems and costs. The first issue is the waste stream of the cleaning materials that is created. Particularly during initial cleaning, the liquids will now have some level of the API requiring special treatment and disposal. Some solvents used take a toll on stainless-steel surfaces ranging from chemical attack to surface roughness changes.

The roughness of product contact parts is strictly controlled when making stainless-steel processing equipment. Soon after use and multiple cleanings, surfaces will become rough and more difficult to clean. Particles can remain in the roughness, particularly scratches, requiring even more attention to cleaning while again posing the risk of contamination. The ILC Dover single-use isolator is made from ArmorFlex film. This film was developed specifically for the pharmaceutical market using the voice of the customer to include design attributes that would be key to successful use.

ArmorFlex® is a special blend of polyethylene polymers to deliver a high strength film. ArmorFlex® 113 used for single-use isolators allows for more than 500% elongation before failure. The risk of any failure of the flexible wall is all but eliminated. Another attribute is solvent resistance. Knowing the ArmorFlex could be exposed to solvents, the compound was chosen over less resistant materials such as polyurethane. ArmorFlex® was tested to the most critical ASTM standard for submersion in typical solvents used in pharmaceutical manufacturing to assure resistance and that physical properties would be maintained.

The need for better cleaning and reducing risk of cross-contamination is covered in many directives and guidance documents. FDA GMP Guidelines, EU GMP Annex I, ICH Q9, and ISPE RiskMaPP all are used to provide guidance on risk-based controls for cross-contamination. It’s clear that data-driven studies understand that a surface is never perfectly clean no matter how much time is spent cleaning.