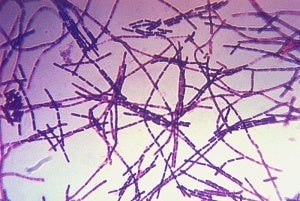 The US Food and Drug Administration last week approved raxibacumab injection for the treatment of inhalational anthrax under its Animal Efficacy Rule, which allows approval based on animal testing alone.

Raxibacumab is the first monoclonal antibody to be approved under this rule, which allows efficacy findings from animal studies to determine FDA approval when it is not ethical or feasible to conduct trials on humans.

The Animal Efficacy Rule is designed to aid approval for drugs for treating infectious diseases such as anthrax, which is considered a biological terrorism threat and can be spread via breathing in spores of the bacterium Bacillus anthracis.

Although extremely rare, it can spread very quickly through the air and can cause irreversible skin tissue damage as well as death.

Raxibacumab is already approved to prevent inhalational anthrax when alternative therapies are not available or not appropriate.

It is a monoclonal antibody, a protein that closely resembles a human antibody, which neutralizes toxins produced by bacillus anthracis.

"Raxibacumab is the first monoclonal antibody to be approved under the Animal Efficacy Rule, which allows efficacy findings from animal studies to determine FDA approval when it is not ethical or feasible to conduct trials on humans."

Raxibacumab’s effectiveness for inhalational anthrax was demonstrated in one study in monkeys and three studies in rabbits.

The drug therefore demonstrated that it has the potential to provide safe and effective treatment where no satisfactory alternative therapy exists.

"In addition to antibiotics, raxibacumab will be a useful treatment to have available should an anthrax bioterrorism event occur," said FDA Center for Drug Evaluation and Research Office of Antimicrobial Products director Dr Edward Cox.

"Although antibiotics are approved to prevent and treat anthrax infection, raxibacumab is the first approved agent that acts by neutralising the toxins produced by B. anthracis," he said.

The safety of raxibacumab was evaluated in 326 healthy human volunteers. Common side effects included rash, extremity pain, itching and drowsiness.

Image: Microphotograph of a Gram stain of the bacterium Bacillus anthracis, the cause of anthrax disease. Photo: Courtesy of CDC Public Health Image Library.

US midterm election results have multiple implications for the pharma industry