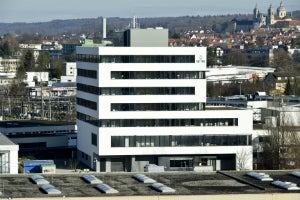 Vetter has announced that following two years of construction, its Schuetzenstrasse multi-functional building has been completed on schedule and departments critical to its operation have started to move in.

The €29m investment in the new building is part of a €300m total investment strategy announced by the company in September 2015 for further development to its manufacturing sites for additional manufacturing capacities.

The Schuetzenstrasse building is in response to increased demand by customers for support in drug development, as well as the need for enhanced IT systems to meet future customer and regulatory requirements.

Vetter supports many leading pharmaceutical and biotech companies from development through to manufacturing and final packaging of their drug products.

Continued demand by its large and small customers for enhanced drug development services, as well as future-oriented sophisticated IT systems to protect data, created the need for the 8,500sqm six-storey building.

It contains non-cGMP laboratories for development support, laboratory space for microbiological analysis and office workplaces for Vetter Development Service and IT.

In addition, it includes a data processing centre with enhanced security systems, including a safety cell that protects technology and data from external physical hazards in the event of an emergency.

Vetter managing director Oliver Albrecht said: "With the installation of these future-oriented IT systems, we are early on addressing the need for increased connectivity between customers and their manufacturing partners, like Vetter, to efficiently share and store data without concern for its safety."

"With this building, we are meeting the growing demand of our customers for drug development support.

"The investments in both our Development Service capabilities and our IT system reflect two of the core aspects of Vetter’s orientation as an innovative contract development and manufacturing organisation."

2015 was a successful year for the company as evidenced by a growing customer demand for projects in clinical development, commercial manufacturing, and final packaging, a result of Vetter’s high quality and safety standards.

The CDMO was able to increase sales by approximately 10%. Currently, the company employs 3,600 people at its German, US and Asian locations.

The CDMO supported nine drug approvals of its customers within the North American, European and Japanese markets.

In the third quarter, Vetter opened a new subsidiary in Tokyo, Japan, to complement the Singapore operating branch created in 2014.

The company also launched Vetter-Ject, a novel closure system for prefilled syringes for use with highly-sensitive compounds such as biologics.