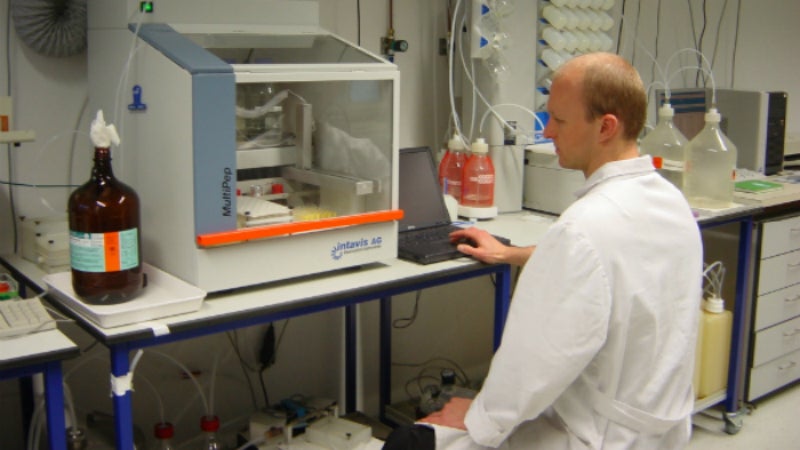 Peptide Specialty Laboratories (PSL) provides conjugation services, synthesisers and can produce any kind of peptide, from milligram to gram amounts with lengths between five and 50 amino acids for the pharmaceutical industry.

All peptides are high-performance liquid chromatography (HPLC) purified and analysed by mass spectrometry.

The company’s production facility holds several peptide synthesisers, which are able to synthesise up to 48 peptides simultaneously.

Conjugation services and production of bioconjugates

The company produces bioconjugates between peptides and proteins or column matrices using bifunctional ligands or other chemically activated intermediates.

Antibodies are normally produced in guinea pigs or rabbits, although immunisations of other animal species are also available.

The company uses high-quality products such as purified peptides and maleimide activated KLH and OVA for preparing antisera.

PSL’s use of high-quality products is evident in the company’s high success rate in generating highly specific antisera.

Peptide sets are valuable tools for screening epitopes, proteases, kinases, antibodies and pharmacologically active peptides. Using peptide sets saves time and money, with respect to the use of recombinant proteins.

Peptide sets of different lengths are also offered, with different quality controls, and multiples from 12 to 96 peptides for each set.

Founded in September 2000, PSL is located within the Technology Park in Heidelberg, Germany.

PSL is originated from the German Cancer Research Centre in Heidelberg. Co-founder and manager of the company, Dr HR Rackwitz, gained experience here in peptide synthesis and antibody preparation.

PSL serves clients worldwide, particularly from the industry and research community of Germany and Europe.

We provide a number of bioanalytical services, including Immunotoxicity.

Bioassay GmbH offers the execution and assessment of potency assays within quality control of active pharmaceutical ingredients and drug products.

Complex biotherapeutics interact with many different molecules in the human body to develop their mode of action.

Bioassay GmbH is running acute toxicity and skin sensitization studies under GLP for the chemical and cosmetic industry.

Bioassay GmbH has established efficacy models to address the demand of characterization of new drugs, especially in the field of biopharmaceuticals like monoclonal Antibodies, Hormones or Cytokines.

We provide a number of bioanalytical services, including Immunotoxicity.

Antibody-Dependent Cell-mediated Cytotoxicity (ADCC) is a mechanism of immune defence attributed to the mode of action of several tab, in particular tumour cell targeting.