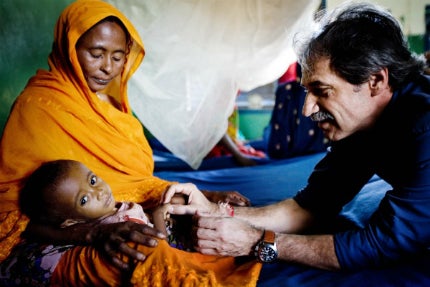 The PfEMP1 vaccine – the quest to induce antibodies

"Plasmodium falciparum is the most deadly of the five Plasmodium species that cause human malaria."

This can cause blockages in the blood vessels of the brain, leading to cerebral malaria – the most severe form of the disease. Fortunately, researchers from the universities of Edinburgh, Cambridge, Melbourne and Portugal believe that PfEMP1 is a possible target for a vaccine – to induce antibodies to prevent rosetting and cerebral malaria.

When examining the vaccine potential of the six extracellular domains of a rosette-mediating PfEMP1 variant, by immunising rabbits with recombinant proteins expressed in E. coli, it was found that potent antibodies can be generated to recombinant PfEMP1 domains – preventing rosetting and inducing the destruction of infected blood cells.

Nevertheless, further work is needed on rosetting mechanisms, as well as on defining a set of PfEMP1 variants that could induce functional antibodies against a broad range of P. falciparum parasites.

Targeting the binding mechanisms of malaria

Scientists have known for a long time that red blood cells infected with the malaria parasite can lead to death by sticking to the sides of blood vessels and causing lethal blockages. However, the binding mechanism associated with the most lethal forms of malaria remained unknown – until recently.

Researchers at the University of Copenhagen, in collaboration with Seattle Biomedical Research Institute, the University of Oxford, NIMR Tanzania and Retrogenix LTD, have identified that in cerebral malaria the parasite reproduces in the red blood cells before binding itself to proteins on the wall of the Endothelial Protein C Receptors (EPCR) blood vessels.

EPCR and a factor in the blood called protein C act as a ‘brake’ on blood coagulation and endothelial cell inflammation, as well as enhance the viability and integrity of blood vessels. The challenge remains, however, to produce an immune response that targets these two proteins. In addition, the proteins themselves would need protection, not elimination. This research is a huge breakthrough in our understanding of malaria and the development of a potential vaccine, but a vaccine remains a long way from being developed.

The challenge of drug resistance

In 2009, researchers at the Australian Monash University and the University of Technology discovered Bestatin – a drug that starves the malaria parasite to death by binding to the digestive enzyme PfA-M1 and preventing it from functioning. If effective, this could eliminate the parasite. However, immature parasites have an under-developed digestive system and therefore Bestatin-based inhibitors might not be effective on them – allowing them to build up a resistance to the drug over time.

"However, the binding mechanism associated with the most lethal forms of malaria remained unknown – until recently."

Fortunately, international efforts have led to the development of a drug that has the potential to cure all strains of malaria with a single dose. The compound uses NITD 609, in the chemical class of spiroindolones, which is different to any other drugs currently used to treat malaria. Australian scientists have discovered a salt pump on the malaria parasite that is used to remove salt waste. NITD 609 blocks that pump, filling the parasite with salt and killing it within minutes.

This treatment is anticipated to be available in six to seven years, and would completely change the treatment of malaria. Since only one dose is needed, the treatment would be cheaper than current treatments and would reduce length of hospital stays and recovery times.

In an interview with Valentina Buj, Malaria Health Specialist for UNICEF, New York, she reveals that: "The reason we need one dose is multifaceted. One of the problems that underlies resistance is that patients often don’t take the full dose (even though it is only three days). Sometimes they will save part of the drugs for next time they think they have malaria, or if it is co-blistered they will only take part of the drug and not the full combination."

Buj further highlights: "The other big problem is that malaria is a disease of poverty – those being affected are the most poor in the most inaccessible areas. Therefore, getting them a one-shot effective dose which could be administered easily in communities affected by malaria would ensure that we are making inroads against the disease."

"The compound uses NITD 609, in the chemical class of spiroindolones, which is different to any other drugs currently used to treat malaria."

Another promising drug is ELQ-300, which is being researched by a team at the Switzerland-based Medicines for Malaria Venture, in collaboration with Professors from universities in the US and Australia. This drug was developed to kill the malaria parasite at all stages of its lifecycle, which is achieved by targeting the mitochondria and preventing the parasite from replicating.

Buj asserts: "This is really what we need – something that will be simple, easy to administer and has no side-effects. One of our biggest problems is that many underlying infections are asymptomatic, so when the mosquito bites someone that didn’t seem to have malaria they could still transmit it to someone else who will then have a full-blown and possibly lethal infection. We therefore really need drugs that can target all stages of the parasite as only then can we start to envision blocking transmission."

If successful, this drug will be ground-breaking in its ability to both prevent and treat malaria. Since all stages of the parasite’s lifecycle are targeted, the chance of resistance being built up by the parasite is reduced. However, present findings only show it to be effective against P. falciparum, so further tests are required with other species of malaria.

According to Buj: "The malaria community is currently focusing on ensuring ‘universal coverage’ with malaria prevention and treatment (i.e. making sure everyone at risk for malaria has access to the drugs and preventative measures they need to keep themselves free of infection). This is in line with the UN Secretary General’s call in 2008 and with the hope of achieving Millennium Development Goal 6 by 2015 – to combat malaria and other diseases."

She explains that: "Various innovative preventative measures, especially those which would be ‘transmission-blocking,’ are being tested to examine ways to prevent the mosquito becoming infected with the malaria parasite. If the mosquito is not inoculated with the parasite then they cannot pass it onto humans. If any of these methods, which range from sterile male mosquitos to disabling genes in the parasite, were successful it could eventually lead to ensuring that malaria is no longer a public health problem."

Advances in malaria prevention and treatment are opening up the possibility for a malaria-free future. Nevertheless, despite these huge advances, due to safety and efficacy testing, it will take years for the discussed innovative cures to be available to the public. In the meantime, Buj reassures that: "The malaria community is focusing on ensuring that everyone at risk – especially children and pregnant women – has access to an insecticide-treated net, especially those which are long-lasting, and that they get properly diagnosed and treated with the currently effective drugs, artemisinin-based combination therapies (ACTs), when they are infected with the malaria parasite."

Feeding the resistance – how animal antibiotics could affect your health

It’s well known that overusing antibiotics can lead to resistance, but what of the altogether more surreptitious variety entering our bodies via the food we eat?

NewAmsterdam Pharma raises $196m through Series A funding round

13 Jan 2021
Registration is disabled.
We use cookies to ensure that we give you the best experience on our website. If you continue to use this site we will assume that you are happy with it.ContinueLearn more