The discovery and design of novel therapies is an increasingly challenging endeavour in the 21st century; though technology has progressed in leaps and bounds, identifying previously unknown molecules and drugs has become trickier, and every avenue that could accelerate or enhance the process must be explored. Approaches that were once unthinkable, such as artificial intelligence, have become commonplace in drug discovery – and now, quantum computing is emerging as pharma’s next frontier.

The advantages of quantum computing

Though the application of quantum mechanics in pharma is still in its infancy, quantum computers’ capacity to drastically accelerate and optimise testing and predictions makes it a natural partner for the drug discovery space – and the life sciences are keen to get involved. QuPharm, for example, was formed in 2020 by major drugmakers to advance the implementation of quantum computing in the pharmaceutical industry. One company working to make this dream of quantum-powered drug discovery a reality is Australian-German start-up Quantum Brilliance .

According to the company’s co-founder and chief scientific officer Marcus Doherty, quantum computers have a natural advantage over classical systems when it comes to simulating molecules for in silico drug discovery and design.

"The company is working to revolutionise in silico approaches to drug discovery with quantum-accelerated molecular dynamics." 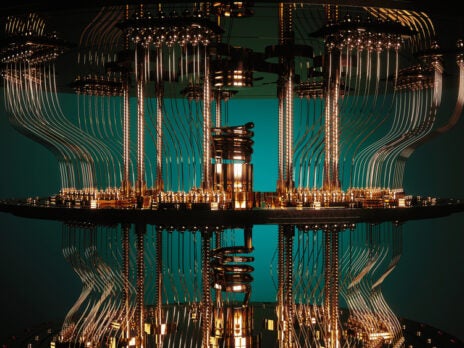 “This is an example of how the resources for a classical computer explode if they want to simulate something quantum mechanical like a molecule, compared to a quantum computer.”

Quantum Brilliance’s diamond-based computers are a fraction of the size of typical mainframe quantum computers, and can run without the extreme conditions usually required. Because the company’s hardware differs from that of traditional mainframes, Doherty says, it can be used in a different way.

He explains that there are two approaches to computational chemistry: simulating a single, complex molecule to understand its properties, or studying the interactions within a large system of molecules. Most quantum computing hardware tackles the former – but the latter, known as molecular dynamics, is where Quantum Brilliance’s attention is focused.

“We want to understand that reaction, and all of the complexity involved in that reaction around what is produced, what inhibits the production of things that we want, what the by-products are, and how we can stimulate and drive that chemical reaction,” Doherty says.

He points out that the reactions simulated in molecular dynamics are the same as those seen in enzymes, which are widely used as the basis for many therapeutic products.

The company’s vision is to build a “massively parallelised” system in which quantum accelerators and classical computers are deeply integrated, and therefore able to simulate several complex molecules and their reactions at once.

Quantum Brilliance’s accelerators could revolutionise in silico drug discovery, but the technology itself is still under development.

“It’s challenging right now, because the hardware is evolving,” Doherty explains. “It’s not quite at a scale where it can be used today to solve the tough, important problems that people are trying to tackle.

“There is some time yet before hardware gets to the point of sufficient performance and sufficient scaling, being able to encode enough information to actually solve the problems.”

But that doesn’t mean people shouldn’t be thinking about implementing quantum accelerators in their drug research projects, he says. The company anticipates its devices will be poised for application in pharma in the not-so-distant future – within three to five years, it hopes – and Doherty is optimistic about what the technology would mean for drug research.

“[Quantum accelerators] dramatically lower the barrier to doing computational simulations that accelerate drug design, and the understanding of chemical processes that you’re observing in the lab,” he says.

“It’s about really lowering that barrier to having adequate computational resources, to actually using computational chemistry to help your design and help you accelerate your research by understanding what your experiments are showing you.”

Use of Artificial Intelligence in Pharmaceutical Drug Development and Clinical Trials: Case Study

Use of Artificial Intelligence in Pharmaceutical Supply Chains, Sales and Marketing: Case Study