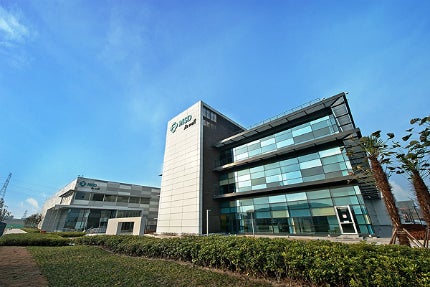 Merck officially inaugurated a new drug packaging facility at Hangzhou in April 2013. The new plant is located in the Hangzhou Economic and Technology Area (HEDA) in Hangzhou, China.

It is one of the largest facilities of the multinational pharmaceutical company in Asia Pacific.

The plant was established by joint venture comprising of MSD China and Huadong Medicine. It was constructed with an investment of $120m.

Details of the Merck’s Chinese facility

“The plant largely supplies the packed solid and sterile medicines to China and Asia-Pacific countries.”

The facility has a total floor space of 75,000m². It packages medicines for China as well as the Asia Pacific region. The plant created about 350 new jobs. It is Merck’s second facility in Hangzhou and third plant in China. The facility is fully compliant with the rigorous international quality, environmental, safety and compliance standards.

The facility includes 16 high-speed lines for packaging both tablets and sterile products. It has the annual capacity for producing more than 300 million packages.

The plant packages drugs that are especially meant for diabetes and cardiovascular diseases, as well as those for infectious, respiratory and bone diseases. The plant will also package products for clinical studies and medicinal products to be launched in future.

The plant largely supplies the packed solid and sterile medicines to China and Asia-Pacific countries.

Construction of the drug packaging plant in China

The construction of Merck’s Hangzhou facility was started in July 2010 and took more than two years to complete. The plant was officially inaugurated in April 2013.

The Hangzhou facility was constructed in compliance with quality measures and standard environmental and safety practices. It received Good Manufacturing Practices (GMP) certification in January 2013. It was constructed using environment-friendly procedures, which included waste, special air and water-management procedures and systems.

“The facility is fully compliant with the rigorous international quality, environmental, safety and compliance standards.”

The company, including its new Hangzhou facility, currently has three factories in China. The manufacturing plants of the company in China produce and supply products to the highest standards of quality, environment, health and safety for China and the Asia Pacific region.

Merck has offices in ten Chinese cities, with the marketing and sales headquarters located in Shanghai. The company has more than 5,000 employees in China.

The healthcare system in China has been growing rapidly, which prompted Merck to establish the Asia R&D headquarters in Beijing in 2011. The company is committed to invest more than $1.5bn for R&D in China in the next five years. It has introduced more than 40 innovative medicines and vaccines in China during the last two decades. It continues to invest more towards research and innovation in the country.

Merck has 72 drug manufacturing facilities and approximately 83,000 employees worldwide with its drugs and vaccines supplied to more than 140 countries. The company produces a range of prescription medicines, vaccines, biologic therapies and animal health and consumer healthcare products. Its sales revenue for 2012 stood at $47.3bn.

Merck’s strategy in the recent times has been to reduce the manufacturing operations worldwide where it faces cost challenges, and to expand in emerging Asian markets. The company especially prefers to expand the operations in China, because it desires to leverage from increasing domestic demand coupled with low cost production potential.

API Chemical Companies in Contract Manufacturing for the Pharmaceutical Industry

Commercial Packaging Companies in Contract Manufacturing for the Pharmaceutical Industry

Are we entering the era of biologics for COPD?