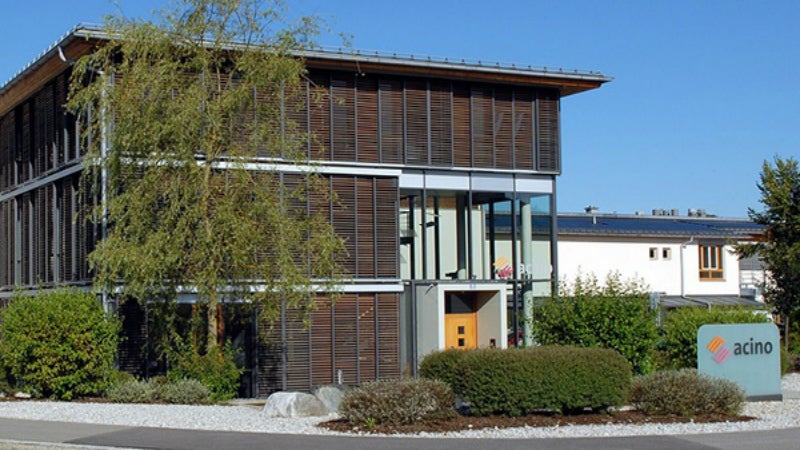 The plant is owned and managed by Acino Holding and it produces commercial quantities of transdermal rivastigmine patches.

Acino received EU approval for the rivastigmine patch for the treatment of mild to moderate forms of Alzheimer dementia in March 2013. The patch was launched in the German market in partnership with Betapharm in April 2013.

Acino also received the US Food and Drug Administration (FDA) approval for manufacturing the transdermal rivastigmine product at Miesbach facility in September 2013.

The new facility was constructed with an investment of approximately €20m ($25.06m) and created employment for 40 highly skilled professionals.

"The new facility was constructed with an investment of approximately €20m ($25.06m) and created employment for 40 highly skilled professionals."

The new facility at Miesbach features laboratories and modern storage spaces well-equipped with sophisticated pharmaceutical manufacturing equipment. It is currently the second biggest manufacturer of transdermal patches in Europe.

The new plant began operations at the end of 2012 and has enough space to carry out future expansions. The current production capacity of 37 million patches per year is planned to be doubled or tripled in the coming years.

Acino also plans to roll-out rivastigmine patches in other markets and supply license takers with the finished product.

"The current production capacity of 37 million patches per year is planned to be doubled or tripled in the coming years."

The drug-in-adhesive layer is created by coating, drying and lamination of liquid mass and the laminate is then sliced into daughter rolls. The patch forms are punched and each patch is then sealed into pouches.

Construction of the Miesbach facility

The foundation stone for the new manufacturing facility was laid down in July 2011. The foundation ceremony was attended by a number of dignitaries including the county commissioner of Miesbach Dr Jakob Kreidl, the first mayor of the city Ingrid Pongratz, the managing director of the investment promotion agency (SMG) of the county Miesbach Oliver Reitz and the CEO of the Acino Group Peter Burema.

PhC PharmaConsult, a subsidiary of i+o Industrieplanung + Organisation, was contracted for the design, site supervision and qualification of the facility. The construction was completed on time and within the budget with the coordination of project management, integrated building design and logistics of i+o.

Acino is a leading pharmaceutical company headquartered at Aesch, Basle, Switzerland. The company employs approximately 788 people across 80 countries worldwide. It is engaged in the development and manufacturing of generic and innovative pharmaceuticals by utilising advanced and patented drug delivery technologies.

The company focuses on the development of sophisticated oral dosage forms with modified release of the active ingredient, transdermal therapeutic patches and biodegradable, subcutaneous implants. It generated annual revenues of €143m ($187m) in the first half of 2013.