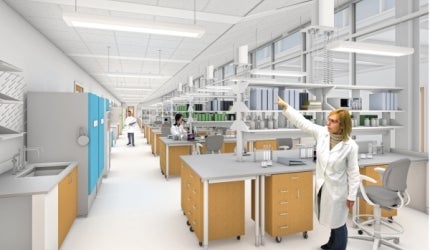 Argonne National Laboratory is building a new advanced protein crystallisation facility (APCF) in Illinois, US. The $34.5m facility will help scientists across the world study the structure and function of different types of proteins. It will also help accelerate the development of new medicines based on this research to fight various diseases.

The project is being funded by the State of Illinois. Groundbreaking for the facility was held in August 2011. Building construction began in August 2012, and is expected to be completed by October 2013.

The project is expected to generate 825 jobs during construction and another 550 indirect jobs upon opening. It will help in expanding research activities at the University of Illinois and also support genomics studies at the US Department of Energy’s Structural Biology Center and the Midwest Center for Structural Genomics.

Protein crystallography in a key technology used by researchers for developing drugs. It provides researchers with three-dimensional (3-D) structures of proteins which are involved in diseases.

Using these structures, researchers identify the sites on the protein where the drug needs to attach and cause reaction. The technology enables researchers to understand the interaction between a new drug and a protein.

Computational methods can be used to predict the interaction of the drug and the protein, but the action needs to be proved experimentally. Existing technologies are very time-consuming and produce just one or two usable crystals for every 100 attempts.

The APCF will address this problem and aid in the development of drugs which can be marketed by pharmaceutical firms. It will use robotics to produce, purify and crystallise proteins five times faster. The proteins to be analysed by researchers can be produced more accurately.

The insights provided by the APCF about proteins will also help in developing new strategies for environmental management, which can be applied in fields such as energy production, agriculture and remediation.

The APCF is a single-storey circular steel structure spread over an area of 55,551ft². It is split into two areas – office space and laboratory space. The laboratory space can accommodate 76 researchers and will have a flexible and modular layout enabling re-arrangement of space at no extra cost. It will include open labs, lab support, shared core lab facilities and a highly specialised crystallisation suite.

"Protein crystallography in a key technology used by researchers for developing drugs."

The state-of-the-art laboratory space will be used for determining the 3-D structures of proteins. It will be connected to the Argonne National Laboratory’s Advanced Photon Source, enabling access and exchange of research between the two centres.

The APCF will use microfluidics and robotics technologies to promote research. Microfluidics includes the use of extremely small droplets of protein solution of 10 to 20 nano litres. Researchers can examine these droplets and choose the best ones that are capable of promoting crystal growth.

The robotics technology will automate the process of crystallography. It includes the use of a crystal mounting robot which will automatically calculate and analyse the protein structures.

The office space of the APCF will include workstations, offices, administrative areas, four conference rooms and a lobby. The conference rooms will feature audio visual equipment and can accommodate medium size gatherings of people.

The office space also includes common areas to promote collaborative discussion. The exteriors of the office space will be clad with glass and metal. Glass will provide views of the surroundings and also cut down energy costs by allowing natural light into the building.

Achillion Pharmaceuticals, Inc., which was founded in February 2000 as one of the largest biotech start-ups in the USA, occupies a renovated space in the George Street Technology Center in downtown New Haven, Connecticut, across from Yale Medical School.

In August 2012, Clark Construction Group in partnership with Jacobs Engineering was awarded a $22.8m contract for the construction of the facility. KJWW was hired as the commissioning agent for the project.