The University of British Columbia and Vancouver Coastal Health 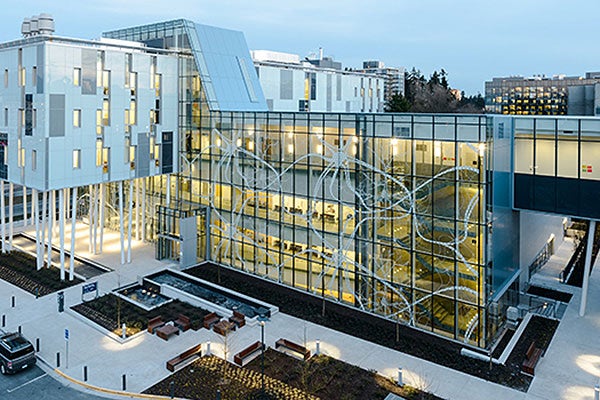 The Djavad Mowafaghian Centre for Brain Health located near the University of British Columbia (UBC) hospital along Wesbrook Mall on the UBC campus in Vancouver, Canada, was opened in February 2014. The facility was named in the honour of Dr Djavad Mowafaghian, who donated $15m for its construction.

The new facility is expected to accelerate the research and clinical expertise in neuroscience, psychiatry and neurology to gain new knowledge that will be used to improve treatment and prevention strategies. It was jointly developed by the University of British Columbia and Vancouver Coastal Health, and brings together clinicians and scientists for the benefit of patients across the world.

Features of the Centre for Brain Health building

UBC constructed a new facility for the Faculty of Pharmaceutical Sciences in Vancouver, bring learning, teaching, community outreach and research under one roof.

The Centre for Brain Health building has a total floor space of 155,000ft² spread over six storeys. The building features an open-concept design with a large atrium on level five.

The first two floors of the building are dedicated for clinic space and the top three floors are used for the research activity. The basement level contains a lecture theatre and brain imaging facility.

The building features state-of-the-art imaging suite, patient clinics, a brain and DNA bank, and well-equipped laboratory for carrying out research in brain health. It is home to multidisciplinary areas of brain health, such as clinics for Alzheimer’s disease and related disorders, movement disorders and multiple sclerosis, the centre for Huntington’s disease, the mood disorders centre, and research facilities for conducting clinical trials.

Design and construction of the centre for brain health

Construction began in October 2011 and the structure was completed by March 2013.

The exterior of the building is clad with bricks, metal, and window glazing. A tunnel connects the basement of the new building to the ground floor of Koerner Pavilion of UBC Hospital, while a sky bridge links the third level of the new building to the second floor of Koerner Pavilion. The building’s north windows feature glass artwork designed to depict two types of brain cells.

"The total investment for the construction of the Djavad Mowafaghian Centre for Brain Health was around $70m."

Heatherbrae was appointed as the general construction contractor and construction manager for the execution of the project.

The total investment for the construction of the Djavad Mowafaghian Centre for Brain Health was around $70m. The British Columbia (BC) government granted $25m, while Industry Canada provided $10m towards the construction.

The BC Knowledge Development Fund under the Canada Foundation for Innovation and matching funds provided $6.48m. The project also received donations worth $13.5m from a number of sources including Charles Fipke, the Townsend family, the Borgland family and Rudy North in addition to the $15m funding contributed by Dr Djavad Mowafaghian.