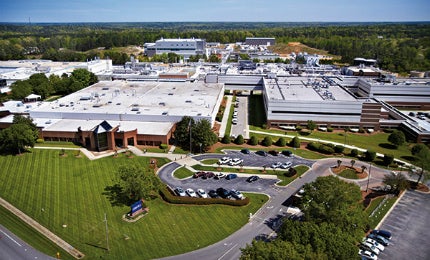 North Fractionation facility (NFF), a new plasma fractionation plant, was inaugurated by Grifols in June 2014 at Clayton in North Carolina, US. The new facility will expand the plasma processing capacity of Grifols Clayton complex nearly two-fold.

With a total floor space of 155,000ft², the facility has the initial capacity to produce 2.8 million litres of plasma each year. The capacity will reach six million litres a year, when the facility attains full production capacity in 2015. The expansion will provide employment for 200 people once fully operational.

The NFF is the one of the biggest plasma fractionation plants in the world. It was built with an investment of $370m under the capital expenditure (CAPEX) plan for the 2012-2014 period.

The facility will help Baxter to meet the needs of patients worldwide who are dependent on the company’s plasma-based therapies.

Fractionation process for the production of plasma-derived therapies involves subjecting plasma to a combination of changes at different temperatures and chemical conditions, designed to sort out various proteins with therapeutic properties. The derived proteins are purified and formulated to be used as medicines.

The medicines developed by Grifols using plasma include immunoglobulin, factor VIII, albumin, and alpha-1, which are used for the treatment of immune deficiency, haemophilia A, blood volume restoration and genetic emphysema respectively.

"With a total floor space of 155,000ft², the facility has the initial capacity to produce 2.8 million litres of plasma each year."

Construction on the North Fractionation facility (NFF) began with the commencement of site clearance in spring 2010. Steel erection for the building started in early summer 2010 and the construction was completed in 2012 using modular construction techniques.

Bobbitt Design Build was contracted to provide finishes for the SuperSkid building and the NFF.

Grifols, headquartered at Barcelona, Spain, is a global healthcare company engaged in the production of life-saving plasma medicines, diagnostics systems and hospital pharmacy products. These products are used in the treatment of rare, chronic diseases such as neurological disorders, immune deficiencies, haemophilia and genetic emphysema.

The company has operated in more than 100 countries and employs 13,200 people. It has a network of 150 plasma donor centres in the US and also provides a range of transfusion medicines, haemostasis, and immunoassay solutions for clinical laboratories, blood banks and transfusion centres.