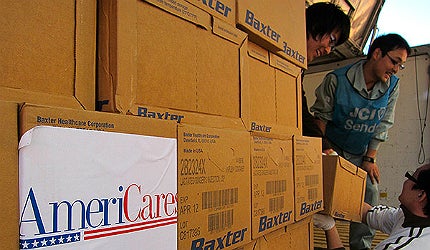 Baxter’s biopharmaceutical spin-off company, Baxalta began construction of a new biologics facility in August 2012. It selected a site for the proposed facility in the city of Covington, Newton County, Georgia, US. The company plans to invest more than $1bn on the new facility between 2013 and 2017.

"The site is strategically located in the I-20 corridor, which provides quick access to road transport."

The facility will help Baxalta to meet the needs of patients worldwide who are dependent on the company’s plasma-based therapies.

The planned investment will create approximately 1,500 full-time jobs in the state. It will also create roughly 2,000 direct and indirect jobs. The plant will begin commercial production in 2018. It started recruiting full-time staff in 2014.

A biotech training centre in Stanton Springs operated by Georgia Quick Start, a customised workforce training programme, will provide technically trained personnel to Baxalta and other biopharmaceutical companies in the state.

Drugs produced at the Covington facility

The facility focuses on the manufacture of products related to immunoglobulin therapy and albumin, a protein commonly found in animal tissues and liquids.

The site for the new facility is located in Stanton Springs, a business park spread across four counties, namely Jasper, Morgan, Newton and Walton. Baxalta acquired 100 acres for the project in the business park.

"The facility will help Baxalta meet the needs of patients worldwide who are dependent on the company’s plasma-based therapies."

The site is strategically located in the I-20 corridor, which provides quick access to road transport. It is also close to a number of plasma collection centres in the US.

The new plant will have facilities to support the development of plasma-based treatments such as plasma fractionation, purification and fill-finish operations for biologic medications of Baxalta. .

The fractionation facility will have annual capacities of up to three million litres.

In addition, there will be a testing laboratory, and separate buildings for warehousing, utilities and administration.

Baxalta started construction on the new facility in August 2012.

Phased development of the Georgia-based facility

Baxter BioPharma Solutions is a contract manufacturer of pre-filled syringes, vials and cartridges for the packaging of vaccines and drugs.

Baxalta plans to develop the Covington site in a phased manner. The current development forms part of the initial phase of the project. The gross built-up area in the initial phase will be one million square feet.

The later phases will expand the facility, depending upon the demand for the manufactured products. The facility will be, therefore, designed with flexibility to expand the infrastructure when the global market needs mean an expansion is required.

The construction of Covington facility also calls for the expansion of the existing filling and finishing capacity at Baxalta’s manufacturing facility in Round Lake, Illinois.

The associated expansion will result in the creation of about 200 more jobs. It will include addition of production capacity for the company’s plasma-based albumin treatment known as Flexbumin, which is offered in a flexible container.

The licensed immunoglobulin therapy currently marketed by the company in the US and Canada is the Gammagard Liquid. It is marketed under the name Kiovig outside the US and Canada. It is used to treat patients with primary immunodeficiency.

The US FDA also approved Gammagard Liquid 10% for the treatment of multifocal motor neuropathy, making it the first immunoglobulin treatment to be approved for that indication. In addition, the company provides blood protein therapies for alpha-1 antitrypsin-deficient patients.

Headquartered at Bannockburn, Illinois, Baxalta is a global biopharmaceuticalcompany that develops, manufactures and markets transformative therapies in hematology, immunology, and oncology.

The product portfolio of the company includes treatments aimed at curing haemophilia, cancer, trauma and diseases related to kidneys and acute medical conditions.

The company has been a leading developer of innovative plasma-derived therapies.

Its focus is on unmet needs of patients requiring these therapies for a long time.

Fluor and Turner Construction were selected to provide construction management services for the project.

Therapure Biopharma is a contract development and manufacturing organization (CDMO)...