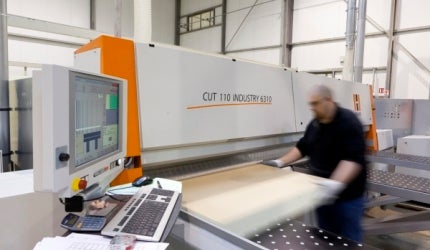 Sofrigam opened its factory in Arras, France, in January 2008. The factory is used to test and manufacture temperature-controlled logistics packaging for the European market, and produces cold chain solutions for companies including GSK, Astra Zeneca and Pfizer.

In 2013, the site was expanded to create additional space for the company’s growing e-commerce business.

"The factory is used to test and manufacture temperature-controlled logistics packaging for the European market."

Sofrigam located the facility in Artoipole industrial estate, Monchy-le-Preux, Arras, northern France, due its proximity to major motorways and the Belgian border. The main site consists of a 7,000m² production facility, which includes a store for raw materials such as polyurethane, a storage space for completed boxes and a production line.

The facility, which produces 250,000 units of packaging a year, utilises automated and manual production techniques. An automatic warehouse feeder loads the material onto one of three Holtz-Her cutting machines, which use specialised software to cut with 1mm accuracy. Any unusual or difficult details or angles are finished on a Charly Pro 2030 cutting machine, and the boards are transported by forklift truck to an assembly space.

Boxes are then assembled using a combination of manual and automatic methods, with hand-finishing required to fulfil customer-specific specifications. An industrial freezer is used to store gel packs, the cold source used in the packaging, for ten days, before the packs are transferred to the packaging, ready for use.

The factory also has a short-term warehouse, which is used to store fully assembled boxes for up to a week. Stock production varies throughout the year to correspond with seasonal changes in demand for cold chain logistics solutions.

The facility also houses manufacturing and storage for the company’s ecommerce websites, La Boutique Du Froid and Coldshop. Designed for the French and UK markets respectively, these sites sell small volumes of temperature-controlled packaging to individuals as well as the pharmaceutical, healthcare, food and cosmetics industries. These are typically designed for short-term transportation, such as from a pharmacy to a patient’s room, and include fabric bags, which are manufactured at the Arras facility.

"Sofrigam located the facility in Arras, northern France, due its proximity to major motorways and the Belgian border."

The testing space includes eight testing chambers for up to 3,000l of material, which can be configured to any temperature between -25°C and +50°C. Temperature profiles in these rooms can be programmed to match a client’s logistics data, or set to follow a season or region-specific temperature profile.

Several of the chambers are equipped with direct monitoring equipment, designed by Eratis, allowing scientists to monitor changes to product temperature in real-time, while two can be equipped with sensors that are analysed after the tests have been run. The rooms are also equipped with alarms that are triggered if the internal packaging temperature goes above a pre-defined limit.

The laboratory is also equipped with three test spaces for products up to 50l, a dry ice store at -80°C and a loading space, which simulates packaging loading environments at any temperature between 0°C and 40°C.

Pharmaceuticals that are used for testing are kept between 2°C and 8°C in a refrigerated chamber. The temperature in this chamber is continuously monitored, and an alarm linked to the lab managers’ phones will sound if the temperature deviates from this range.

In anticipation of business growth from its UK e-commerce website Coldshop, which was launched in January 2013, the company has expanded the facility to include a new 3,000m² warehouse. This will house products for the Coldshop and La Boutique Du Froid websites, freeing up space in the existing warehouse to increase production facilities. Constructed in July 2012, the new warehouse will begin operation in mid 2013.

Following plans to expand its range of products to include very precise temperature-controlled containers that will be rented to customers, the company is also expanding to an adjacent site. Sofrigam plans to sign a deal on the second 5,000m² building at the end of April 2013.

Sanofi Pasteur, the vaccines division of Sanofi Aventis, is focusing on a continuing technology upgrade and expansion.

Sofrigam’s new warehouse has been built to be environmentally friendly. Using wood cladding and polyurethane insulation, the building has been designed to be energy efficient. It will also be fitted with energy-saving lighting and a rainwater collector for the toilets. The warehouse has been equipped with an 11kW wind turbine, which the company estimates will provide approximately 5% of the factory’s power.

The company has also embarked on a two-year green project with an ex PwC employee to reduce waste and increase recycling within the facility.