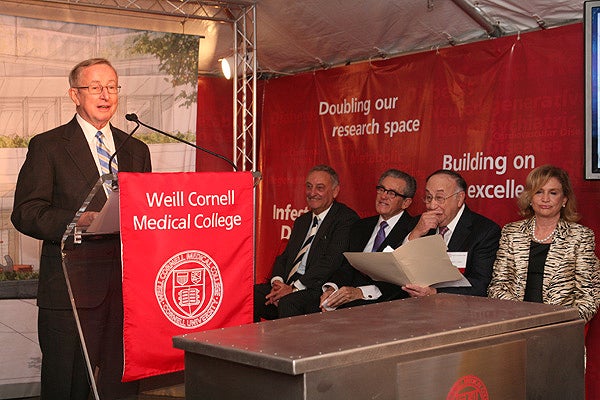 The Weill Cornell Belfer Research Building is situated near the ambulatory care building of the medical college on 69th street in New York City, USA. The new research building is an international hub accommodating global network of scientists and physicians engaged in translating medical research discoveries into therapeutic approaches for treating major infectious and chronic diseases.

The building accommodates translational bench-to-bedside medical research facilities targeting diseases such as cancer, cardiovascular disease, neurodegenerative diseases as well as Parkinson’s and Alzheimer’s, and other global health and infectious diseases.

"The design of the research building incorporates open floor plans to facilitate communication and collaboration between scientists as well as encourage interdisciplinary research."

The design of the research building incorporates open floor plans to facilitate communication and collaboration between scientists as well as encourage interdisciplinary research. The building has a glass façade that provides the interior areas with natural sunlight.

Financing for the construction of Weill Cornell Belfer research building

The building was built as part of Weill Cornell’s $1.3bn Discoveries that Make a Difference Campaign. The total cost of the project was $650m.

The project received more than 38 donations and gifts apart from the $100m donation from Robert Belfer and his wife Renée. The Chairman of the Weill Cornell Board of Overseers Sanford I Weill and his wife, Joan, contributed $135m for the construction of the research building, which was part of the historic $250m pledge made in 2007.

The Starr Foundation donated $75m, and Corinne and Hank Greenberg provided $25m for the project.

Construction of the medical research building

Contractors involved with the design and construction of the research building

The research building design was provided by the New York-based architectural firm Ennead Architects. Tishman Construction was appointed as the construction manager.

The double curtain wall for the building was provided by Permasteelisa Group. The scope of the contract included providing 15,800m2 of curtain wall including single and double wall facades, sunshades, screen walls, zinc panel system, ribbon windows, skylights, and storefronts.