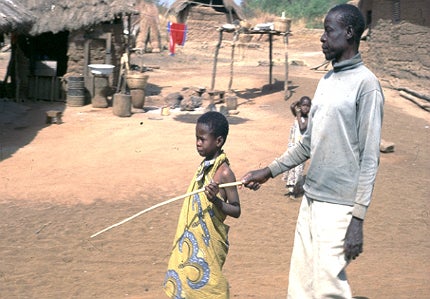 Onchocerciasis – a neglected disease, until now

Almost 100 years after the discovery of onchocerciasis, the disease has infected approximately 18 million people around the world, with 300,000 being rendered permanently blind. Fortunately, the disease is in the World Health Organisation’s (WHO) list of neglected tropical diseases (NTDs) and is receiving a higher priority within health policy.

At the forefront of efforts to eliminate onchocerciasis is the Sabin Vaccine Institute, Washington DC, which launched the END7 campaign through the Global Network of NTDs. This campaign uses the power of social media and digital communications to increase awareness of seven NTDs, including onchocerciasis. Through support from individuals around the world, END7 seeks to amass influence over politicians and world leaders who can more tangibly impact the battle against NTDs, such as onchocerciasis.

"Almost 100 years after the discovery of onchocerciasis, the disease has infected approximately 18 million people."

Amid the fight against river blindness, while there remains more research needed on how to totally eradicate the disease, hope has been offered by the Colombian example. Colombia’s triumph was entirely hinged on the capacity of the private and public spheres to work together. For the private sector, one of the primary organisations in the effort has been Merck & Co Inc., the international developer, manufacturer and distributor of pharmaceuticals.

Merck’s drug donation programme, which commenced in 1987 and involved the donation of the anti-parasitic drug Ivermectin twice a year for 12 consecutive years to countries where river blindness is endemic, invigorated the health initiatives of the public sector. Without this donation programme, Colombia’s success would not have been possible.

According to the Mayo Clinic, this drug has a noted potency against arthropods and parasites, and acts by interfering with their glutamate gated chloride channel. This creates problems in their neural and neuromuscular transmission. Humans and vertebrates also have this channel, but the action of Ivermectin is hindered by the blood-brain barrier.

The drug that won the battle

The effectiveness of Ivermectin is not restricted to onchocerca volvulus, the nematode responsible for onchocerciasis. It is also used for several other nematodes, including Ascaris and Trichuris. However, the drug has an increased potency against the O. volvulus species.

"While there remains research needed on how to totally eradicate the disease, hope has been offered by the Colombian example."

When a person infected with river blindness takes Ivermectin, the drug wipes out all of the first-stage larvae by paralysing them and making them susceptible to the action of eosinophils and macrophages.

Moreover, while Ivermectin is unable to kill adult worms, it disables the reproductive capacities of female worms, ending transmission.

The preventive action lasts for six months, so people with river blindness only need to take the drug twice a year to manage the effects of the disease.

However, the benefits of the drug come with some terrible side-effects, including fever, limb swelling and sometimes serious allergic reactions. There is also fear of future drug resistance. Professor David Molyneux, of the Liverpool School of Tropical Medicine and member of the WHO NTDs Scientific and Technical Advisory Committee and of the International Task Force for Disease Eradication hosted by the Carter Center, Atlanta, says there is no definitive resistance to Ivermectin in Ghana, but a reduced efficacy has been noted, causing microfilaria parasites to repopulate the skin more rapidly in certain areas of the country.

He believes that should resistance to Ivermectin develop, then Moxidectin, the new drug proposed to respond to the threat, would encounter cross-resistance, as the drug has an identical action on the parasite.

Another solution to possible resistance proposed by Professor Molyneux is to adopt the approach of Mark Taylor, Professor of parasitology at Liverpool School of Tropical Medicine, and Professor Achim Hoerauf of the Institute of Medical Microbiology, Immunology and Parasitology, in Bonn. These scientists have both advocated for the exploitation of the Wolbachia antibiotics, specifically Doxycycline, which is a proven macrofilarial drug that kills adult worms by killing Wolbachia endosymbionts.

While the success of Colombia is a real cause for celebration, there remains much work to be done – for starters, 99% of all infections occur in Africa. The challenge for public health practitioners is to learn from Colombia and incorporate lessons learnt into the harsher socioeconomic conditions of Africa.

"The preventive action lasts for six months, so people with river blindness only need to take the drug twice a year."

Professor Molyneux explains: "Africa is more challenging than the Americas, where the disease is distinctly focal. Whilst success should be celebrated in the Americas, the total population in the Americas at risk was only 532,000, and 326,253 of those were eligible for treatment. In Africa, the disease is widespread in remote settings, 120 million are targeted for treatment, the extent of low endemicity is not yet defined, and the implementation of twice yearly treatment is yet to be established."

He is, however, confident that the condition can be sufficiently overcome and elimination of onchocerciasis in African communities is feasible by 2025. This is predominantly due to the delivery system that has been successfully set up to date. Community Directed Distributors (CDDs) deliver drugs to communities as far as 20km from the nearest health facility.

Approximately 650,000 people have been trained to administer Ivermectin. The commitment of these individuals will be of vital importance to the success of onchocerciasis elimination.

Another barrier to elimination is drug attrition. According to Professor Molyneux, an impressive 70% of all drugs approved by the donation programme reach those in need of treatment.

This is compared to a scant ten percent of many other drugs imported into African countries. "The challenge for elimination" says Professor Molyneux, "will be to expand the programmes to areas which are of lower endemicity that were not previously treated. This has cost implications and requires some re-mapping to evaluate the extent of these areas."

It seems clear that the war against river blindness still has some challenges ahead. Professor Molyneux says: "The parameters which will determine success are maintenance of high coverage, maintenance of Ivermectin efficacy, the capacity for programmes to introduce twice yearly treatment in Africa, the discovery of all new low endemicity sites and the solution of the problem of Loa loa (roundworm) Ivermectin induced encephalopathy in areas of Loa loa or onchocerciasis co-endemicity." There is also need for continued funding from the international community.

But the end is in sight

With the success story of Colombia illuminating public health efforts, campaigns such as END7, increasing awareness and drug companies helping the cause through their philanthropy, the end may be near for river blindness.

For the many who have been suffering from the stigma and excruciating physical repercussions that come with this disease, this could not come any sooner.

With the number of people diagnosed with type 2 diabetes set to double in the next ten years Dr Valentina Gburcik, GlobalData’s analyst in cardiovascular and metabolic disorders, looks at what this will mean for the pharmaceutical industry.