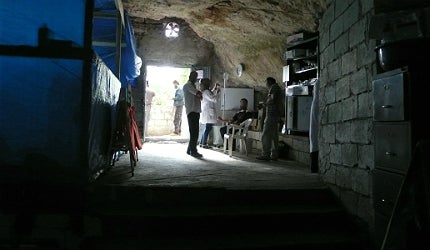 Syria has been besieged by civil war since March 2011, forcing at least 2.5 million people to flee their homes and leaving scores dead and injured. This figure, quoted by the Syrian Arab Red Crescent in November, is more than double previous estimates and, according to the UN, this could rise to as many as four million by early next year.

"Syria has been besieged by civil war since March 2011, forcing at least 2.5 million people to flee their homes."

While humanitarian aid organisations such as Medecins Sans Frontieres (MSF) are ramping up their work in the war-torn country and its neighbouring nations, to provide essential medical care and supplies to the increasing number of displaced people in Syria, there is only so much they can do.

"It’s a very heavy, politicised conflict making it very difficult for most, if not all, humanitarian organisations to support health facilities where people are sick or wounded with medical supplies," said Dr Bart Janssens, director of operations at MSF.

"MSF doesn’t even have official permission to work in Syria so we cannot import any medical goods into the country with the permission of the government."

The situation is exacerbated by the fact that the country’s pharmaceutical industry, on which local doctors and hospitals have historically relied for medical supplies, is barely functioning. "The problem with medical supplies is getting more and more difficult because Syria was a country that relied to a large extent on its own production of pharmaceuticals," Janssens confirmed. "For many reasons linked to the conflict, the industry is no longer functioning as it used to."

Moreover, because of MSF’s restricted access to the country, the organisation isn’t even able to make a full assessment of exactly what the Syrians need.

Nonetheless, MSF is doing everything in its power to provide as many people who have been affected by the violent conflict as possible with medical aid. Indeed, despite the fact that the independent organisation is not officially allowed to operate in Syria, it has already managed to set up and open four makeshift hospitals in the north of the country in areas controlled by armed opposition groups.

""For many reasons linked to the conflict, the industry is no longer functioning as it used to.""

Since the end of June 2012, MSF’s committed teams have treated more than 2,500 patients and carried out around 550 surgical procedures in these facilities, many of them for violence-related injuries including gunshot wounds, shrapnel wounds, open fractures and injuries from explosions.

But, according to Janssen, it is not only emergency wound treatment that the increasing numbers of displaced Syrians need. "As well as treating wounded people, we also treat patients with chronic disease. As hospitals are not functioning very well anymore because of the lack of supplies, we’re seeing more and more need for medication for chronic, non-communicable diseases such as diabetes and heart disease," he noted.

As well as setting up as many healthcare facilities as possible, MSF has also donated tonnes of medical and relief items to field hospitals and clinics in Homs, Idlib, Hama and Deraa since the beginning of the conflict, as well as providing a shipment of relief items and medical supplies to the Syrian Arab Red Crescent in Damascus. On top of this, the organisation is supporting doctors’ networks inside the country through the provision of medicine, medical supplies and surgical and transfusion kits.

"It is absolutely essential for MSF, as well as other medical aid organisations, to be seen as 100% neutral and impartial."

But, as MSF’s access to Syria is so restricted, a lot of the group’s work has had to take place in neighbouring countries, principally Lebanon, Iraq and Jordan, which are becoming increasingly overrun with refugees fleeing the conflict. The latest estimates by the UN put the number of Syrian refugees at more than 300,000 in Jordan, Lebanon, Turkey and Iraq, up threefold from estimates in July, making MSF’s assistance equally key in these regions.

In response to the growing number of Syrians fleeing the country, not only does MSF have a surgical programme operating in Amman, Jordan, which admitted 289 Syrian patients between June 2011 and September 2012, medical liaison officers have also been visiting Jordan’s Zaatari refugee camp, which hosts 30,000 Syrians, to identify wounded refugees in need of surgery.

Moreover, MSF is providing basic healthcare and mental health consultations for Syrian refugees arriving in Iraq, Jordan, Lebanon and Turkey; from March to September this year, the organisation’s medical staff conducted more than 11,600 general healthcare consultations and psychologists and psychiatrists carried out 1,700 consultations.

Staying neutral: the only way forward

But it’s not enough. The MSF’s makeshift hospitals are in danger of bombing, the transport of essential medical supplies remains extremely difficult and patients are facing huge challenges reaching these facilities. On top of this, small teams of staff at MSF hospitals are struggling to cope with major influxes of wounded people in short spaces of time.

And the situation is only set to get worse, with more and more Syrians needing access to emergency care facilities and chronic disease medications, as well as food and shelter, every day. So, what can be done?

"Since the end of June 2012, MSF’s teams have treated more than 2,500 patients and carried out around 550 surgical procedures."

For Janssens, the onus is largely on the Syrian authorities to allow humanitarian organisations to do their work. "MSF is continuously in discussion with the authorities in Damascus to enable us to work in more healthcare facilities inside the country," he emphasised.

"And we hope that these discussions lead to a practical result that can allow us to work in more places in Syria."

Of course, this is easier said than done, and in order to stand a chance of being permitted access to more of the country’s ailing and wounded population, as well as officially being allowed to import life-saving medications, it is absolutely essential for MSF, as well as other medical aid organisations, to be seen as 100% neutral and impartial.

"It’s a very politicised conflict so it’s crucial that an organisation present itself as purely humanitarian, neutral and impartial," Janssens said. "Otherwise, everyone will suspect double agendas for humanitarian work. That’s how we really want to progress with our discussions with the authorities."

MSF’s attempts at discussion with the Syrian authorities have, however, yielded little so far, so it remains anybody’s guess whether the situation will improve from this angle. But in the meantime, MSF will only continue to redouble its efforts, doing everything it possibly can to provide the fast-growing numbers of Syrian refugees with the medical care and supplies they so badly need.

With a large proportion of the developing world unable to afford genuine medication, black market counterfeits are the only option for many.

Brexit and Healthcare Industry - Implications for Pharma - The Story So Far