University at Buffalo, New York, US 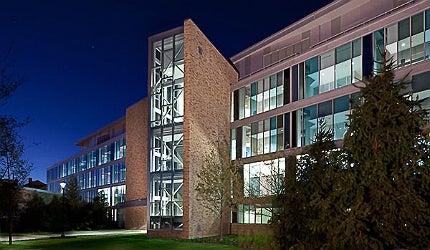 John and Editha Kapoor Hall is located on the south campus of the University at Buffalo in New York, United States. It houses the School of Pharmacy and Pharmaceutical Sciences of the university. It was built with an investment of $62m and replaces the former Acheson Hall chemistry building on the university campus.

The 147,000 square feet facility will mainly focus on research and development in the pharmaceutical sciences. It will provide education programmes to pharmaceutical students, pharmacists and patients.

The location of the hall unites the pharmacy school with other health sciences schools of the university. It will revitalise the south campus of the university, which has been vacant for several years. More than 600 faculty, staff and students will occupy the building.

“It was built with an investment of $62m and replaces the former Acheson Hall chemistry building on the university campus.”

Construction of the new facility is part of the UB 2020 strategic plan to expand the university and increase its economical impact on the region from $1.7bn to $3.6bn. A major part of this plan is the improvement of the north, south and downtown campuses of the university.

The John and Editha Kapoor Hall is the third major project being undertaken at the university. Other projects include Kaleida Health’s Global Vascular Institute, the Clinical and Translational Research Centre and the Biosciences Incubator.

The project marks the first time a school has moved from the north campus in Amherst to the south campus. The university has already upgraded the campus, by adding new roofs, steam tunnels, electric systems, sidewalks and roadways.

It is also planning to renovate the Townsend, Wende and Kimball halls.

Financing the School of Pharmacy

In an act of thanks for the university’s generosity, Dr. Kapoor made a donation of $10.8m to the School of Pharmacy. About $5m of this donation is being used towards construction of the facility.

The university received another $46m from the State of New York. The remaining project cost was met through funds raised from private donors and other sources.

John and Editha Kapoor hall was designed by architects, The S/L/A/M Collaborative. The architects were asked to transform the Acheson Hall, which has been unoccupied since 1994, into a facility that would support both pharmaceutical education and pharmaceutical research.

“Construction of the new facility is part of the UB 2020 strategic plan to expand the university and increase its economical impact.”

The facility is spread across four floors. The first and second floors include two lecture halls and two classrooms, a pharmaceutical care learning centre, a patient assessment suite and a model pharmacy. They also include meeting and study areas, computer labs, gathering areas, offices, conference rooms and a coffee shop.

They can also be used to process BSL3 cultures and radioactive samples. They have a semi-open design, which encourages collaboration between the researchers and reduces infrastructure by centralising common facilities.

Construction of University at Buffalo’s project

The new facility has been designed with several environmentally sustainable features to gain LEED silver certification. The building materials resulting from the demolition of the Acheson Hall were reused for the construction. Certified woods and low emitting materials have been included in the building.

To improve the energy efficiency of the facility, water efficient plumbing, enhanced room temperature controls and air handling systems have been used. The design of the building allows natural daylight throughout the interiors.

The University of California San Francisco (UCSF) has built an automated hospital pharmacy at its new medical centre at Mission Bay, San Francisco.

L.S. Skaggs Pharmacy Institute is a new research facility being built for the College of Pharmacy at the University of Utah (U of U) in Salt Lake City in the state of Utah itself, US.