The University of Maryland Baltimore (UMB) 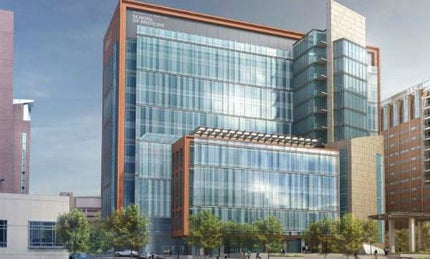 Construction of a new biomedical research facility known as Health Sciences Facility III (HSF III) began at the University of Maryland campus in September 2013. The research facility is being built by replacing Hayden Harris Hall located at the university campus in Baltimore, US. It will house a state-of-the-art collaborative research space upon its scheduled completion by the end of 2017.

The HSF III facility will continue to complement along with HSF I and HSF II facilities, which were constructed in the University of Maryland Baltimore (UMB) campus in 1995 and 2003 respectively.

The facility will provide employment to approximately 3,000 people during the construction phase and about 600 research scientists when it opens in 2018.

The ten-acre BioPark is located in the affluent Westside downtown district of Baltimore, US.

The new HSF III facility will have a ten-storey building with a total floor space of 428,970ft² (39,853m². It will be occupied by the schools of medicine, dentistry and pharmacy to carry out advance scientific discovery and breakthroughs to address the most critical disease categories.

It will consist of two towers housing wet and dry labs that will be connected by a glass atrium with bridges across allowing for easy movement between the lab areas. The lower level will be equipped with a four modality imaging core, while the first floor will accommodate a nano-medicine and synthetic chemistry suite, and a Class 10,000 clean room. The top floor will include a vivarium that can house about 17,000 rodent cages, and varying species up to the size of non-human primates.

Ground was broken for construction of the research facility in September 2013, with work slated for completion by December 2017 and operations expected to begin in January 2018.

Building information modelling (BIM) and integrated project delivery (IPD) methods will be employed during construction. A 4.5ft thick mat slab will be built to provide protection to the imaging centre’s equipment from possible flooding.

"The total estimated investment for the construction of the research facility is $305.4m."

HOK in collaboration with Design Collective was awarded the contract to provide architecture and interior design for the HSF III building. Jacobs provided the designs for laboratory planning and programming.

Barton Malow Company was appointed as the construction manager. Southland Industries was awarded the preconstruction and early mechanical construction contract. Its contractual scope includes preconstruction design, and installation of mechanical, plumbing and process piping services. It also includes the vivarium as well as administrative spaces.

The total estimated investment for the construction of the research facility is $305.4m. UMB will provide about $200m funding for the project, under the state capital improvement programme. The University of Maryland Medical Centre will contribute $30m.

The new HSF III building will aim for LEED Silver certification. The building will include environment-friendly facilities such as a new chiller plant and a steam central plant. It will also include other eco-friendly systems such as rainwater harvesting and reverse osmosis. Fan-powered induction units and chilled beams will be provided in the lab spaces.