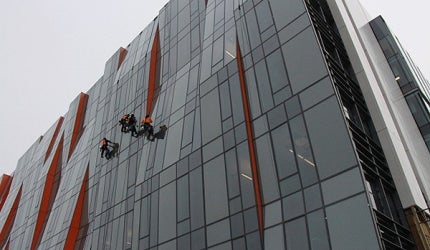 The new medical research complex at University of Washington (UW) School of Medicine in South Lake, Seattle was completed in March 2013. The new facility will house many of the university’s biomedical research laboratories. It is expected to receive certifications by spring 2013.

The construction was primarily sponsored by UW School of Medicine, Vulcan Real Estate and the National Development Council.

The medical research facility at UW School of Medicine

"The new facility will house many of the university’s biomedical research laboratories."

The new phase three research centre has a total floor space of about 330,000ft2, in a seven storey building. The research complex is surrounded with beautiful landscape and features a tree-lined sidewalk. It has two spacious seminar rooms with videoconferencing capabilities and also features 266 parking spaces located in two bays.

The third phase has laboratories for kidney research, vision sciences, rheumatology, immunology and infectious disease investigations. The scientists at the new facility will focus on a number of medical conditions, including multiple sclerosis, blindness, malaria, lupus and renal failure.

The new facility will be engaged in developing life-changing therapies and medical breakthroughs that will positively impact the health of future generations. The facility can accommodate between 1,000 and 1,200 researchers and support staff.

The design and planning for the construction of the research complex began in September 2003. The facility broke ground for construction in 2004. The first phase of construction was completed in January 2005. It included a total floor space of 215,000ft2.

"The scientists at the new facility will focus on a number of medical conditions, including multiple sclerosis, blindness, malaria, lupus and renal failure."

The Board of Regents approved the third phase of the medical research complex’s construction in April 2010. The third phase broke ground in July 2011 and was completed in March 2013.

The University of Texas Health Science Center (UTHSC) opened the new South Texas Research Facility (STRF) at its campus in San Antonio, US, in October 2011.